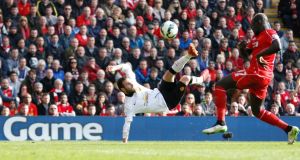 It was the kind of performance from Manchester United that has been a long time in the making and, for Steven Gerrard, another personal ordeal in an expanding file. Not as harrowing, perhaps, as the one that means Anfield is now subjected to chants of “you nearly won the league”, but one that still can be filed among the more incongruous moments of all those fine years in Liverpool’s colours. Gerrard badly let down his team-mates and for a player of his distinction that will be the hardest thing for him to take.

Perhaps it was the taunting from the away end that got under his skin. Or more likely it was the knowledge that his team were being outplayed and that this would be the last time he could ever influence one of these occasions. Gerrard had barely worked up a bead of sweat by the time he was on his way back down the tunnel. There wasn’t a scuff of dirt on him. But the occasion – his last Liverpool-United fixture, starting on the bench, with his team needing the old Gerrard – undoubtedly got to him.

A half-time substitute, he had barely been on the pitch 30 seconds when Ander Herrera slid in at his ankles. The former England captain was clipped and dealt out his own retribution, bringing down his studs on Herrera’s shin while the Spaniard was on the ground. The referee, Martin Atkinson, saw it all and Anfield blinked, rubbed its eyes and tried to take in a sending-off that was crazier and more self-defeating than anything Mario Balotelli has done this season.

Balotelli, another substitute, had to be held back later on by some quick-thinking fans as he tussled with Chris Smalling by the touchline. The Italian had been booked within 90 seconds of coming on and those supporters probably spared their team from going down to nine men. We expect this kind of brainstorm from Balotelli. But Gerrard? It was a gross dereliction of his duties and that lack of control seemed contagious. Martin Skrtel could conceivably face retrospective action for the stamp on David de Gea that engulfed the match in more controversy right at the end.

A man down, Liverpool actually played with great togetherness in an attempt to pull off an improbable feat of escapology. Juan Mata’s brilliant second goal arrived just before the hour and at that stage Liverpool might have been excused for thinking the game had become an exercise in damage-limitation. Instead, they came back in a way that threatened to dismantle what could feasibly have been United’s most rounded performance of the season. Daniel Sturridge halved the lead after 69 minutes and there were some anxious moments for Van Gaal’s players before Simon Mignolet saved Wayne Rooney’s stoppage-time penalty and the chaotic, bad-tempered finish.

There is no doubt, however, that on the balance of play the better team won. Mata was superb, with Herrera not far behind whereas Liverpool’s lack of discipline was accompanied by the sort of flaws that undermined them earlier in the season. David de Gea might be aggrieved about being beaten at his near post by Sturridge’s shot but it was a slick and controlled performance that leaves United firmly established in fourth position, only a point behind Arsenal and two short of Manchester City.

The first half in particular saw Van Gaal’s team playing in a way that has been seen only sporadically since he took the job. Yet Brendan Rodgers must be startled by the sudden deterioration in his team. Just before the half-hour, one statistic flashed up that Mignolet had touched the ball more times than Jordan Henderson (eight). Liverpool’s only real chance of the first half, fired wide by Adam Lallana, followed shortly afterwards and originated from Henderson’s crossfield pass to Daniel Sturridge. Yet the Liverpool captain was overwhelmed in a way that, ironically, must have made the home crowd crave Gerrard’s presence.

In better times, Gerrard would have found another way to show he would not tolerate this kind of passiveness. There would have been a crunching tackle, or a long-range shot, or a driving run perhaps to get the crowd to its feet and lift his team-mates. The difference is he would have relied on pure ability and competitive courage rather than needing to blur the lines between right and wrong.

There is no real mitigation for a player of his vast expertise but it is easy to understand why Gerrard was burning up with frustration. Raheem Sterling was out of position and out of sorts. Joe Allen was another who let the game pass him by and, defensively, there were some startling moments of carelessness all the way until Emre Can brought down Daley Blind for the penalty. Marouane Fellaini’s opponent found him a difficult man to tangle with. Daley Blind and Antonio Valencia pushed up from their full-back positions. Herrera played in a way that made it feel absurd he has found it so difficult to get a place in the team and, above all, Mata looked absolutely determined to have a telling impact.

His first was clinical in its execution, and classy in its creation, but the second was a thing of beauty, a scything volley after launching himself into the air and the perfect connection to send the ball into the far corner.

Liverpool were incensed in the second half that Phil Jones was not sent off for a late challenge on Henderson but it was probably a shade between a yellow and a red – blood-orange, perhaps – and their real problem stemmed from not passing the ball well enough or defending with cohesion. Alberto Moreno’s positioning for Mata’s first goal was a case in point. Skrtel was not in line with the other two centre-backs and Herrera’s pass was beautifully weighted for Mata to finish with an equally precise shot in off the post.