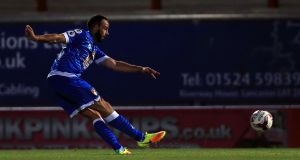 Bournemouth defender Marc Wilson revealed he ignored the advice of his team-mates as he struck what proved the winner in Wednesday’s 2-1 EFL Cup victory at Morecambe.

Wilson, whose previous goal in club football came in December 2010, heard shouts of “don’t shoot” as he lined up the fine effort from around 25 yards out in the 54th minute at the Globe Arena.

After what was his first appearance back in a Bournemouth shirt since rejoining the club last week, the 29-year-old told BBC Radio Solent: “I just took the touch inside and thought why not?

“I just hit it and it found the back of the net and I was over the moon.

“Some of the boys were saying, ‘don’t shoot, don’t shoot’ but I hit it anyway.”

Wilson has joined Bournemouth on a permanent deal from Stoke, nine years on from spending time on loan at the club from Portsmouth – a stint in which he played alongside current Cherries boss Eddie Howe.

“That’s my first game in seven months since I ruptured my medial (knee ligament),” Wilson said.

“I was gutted I missed the Euros, so I wanted to get it right this time.

“I spent most of my time in America, I got my knee right, I was feeling good, then I had a good pre-season and decided to move to Bournemouth.

“This is where I’m at and I’m concentrating on doing well at Bournemouth now.”

Wilson had a mixed night against League Two leaders Morecambe, almost netting an own-goal not long after his strike.

And that was the case in general for a much-changed Cherries outfit, who had taken the lead through Max Gradel’s eighth-minute shot only for Cole Stockton to equalise six minutes later.

The Shrimps also hit the woodwork twice but Bournemouth secured a third-round clash at home to Preston thanks to Wilson’s winner.

Wilson said: “I couldn’t care who scores the goals to be honest, as long as we get the win.

“It was a tough night, they made it hard for us. There are definitely things we can work on.”