Manchester United unwilling to sell Rooney despite the striker’s dissatisfaction 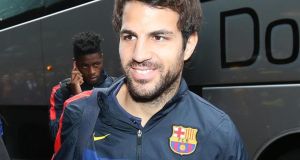 Manchester United will not sell Wayne Rooney even if their No1 target Cesc Fabregas or another forward is recruited this summer. Rooney is intent on leaving due to the breakdown in his relationship with the club and, despite their position that he is not for sale, there has been a sense on the pre-season tour that, if a like-for-like replacement was bought, this could shift United’s stance.

However, the club will not change their view that Rooney is not for sale.

David Moyes will also wait until Marouane Fellaini’s buy-out clause expires on 31 July before deciding whether to move for him and the manager is hopeful of striking a better deal than the €26.6 million currently required to prise him from Everton. Whether the Scot decides to move for the Belgian may hinge on the success of his pursuit of Fabregas, with Moyes describing negotiations as “ongoing”.

Transfer strategy
Regarding Rooney, the caveat is that, if Real Madrid’s Cristiano Ronaldo or Tottenham Hotspur’s Gareth Bale could be recruited, then United’s transfer strategy – including the position of Rooney – could change.

However, given the firm view that the chances of either player moving to Old Trafford this summer are remote, this eventuality appears unlikely.

Chelsea had a €23 million bid for Rooney rejected last week. Moyes is particularly minded not to sell to a title rival, especially one strengthened by the return of Jose Mourinho as manager.

On Wednesday United upped the stakes in the fight to keep Rooney by tweeting a picture of the striker over the legend “BACK, Stockholm, 6.8.13” to underline that he is not for sale. The forward has been pencilled in for a return on that date in a pre-season friendly against AIK despite his intention to leave.

“Wayne Rooney is running and is probably at the level we would have thought he would be,” the manager said. “He has picked up his work again this week.”

After Roberto Martinez, the Everton manager, stated that United are yet to bid for Fellaini, Moyes continues to weigh up whether the Belgian is suited to his plans for the team.

Too high
Sources close to the 25-year-old have confirmed that negotiations can begin after 31 July and Moyes believes that price is too high a price for a player not yet proven at the highest level.

Ideally Moyes wants two midfielders and, if Fabregas was to be bought, he would then consider if Fellaini could complement the Spaniard, plus Michael Carrick and Tom Cleverley. The manager’s statement that the strategy to buy Fabregas is “ongoing” underlined that the 26-year-old is his prime focus and other transfer business secondary.

Regarding Fellaini and Leighton Baines, for whom United had a bid rejected earlier this summer, Martinez said there had been no recent firm interest in either player.

“All I’m focusing on is working day to day, seeing players fighting to get in the starting team in August. That’s the only focus that I have,” he said.

“Any speculation from the outside is just speculation and a compliment to the players and the football club. There’s nothing we have to tell our fans. The last concern I have is what the other clubs do.”

Robin van Persie will feature in United’s tour match against Cerezo Osaka this evening, after being taken off as a precaution during Tuesday’s 3-2 defeat to Yokohama F-Marinos due to tightness in his thigh.

“It was just a precaution,” said Moyes. “I expect he will play.” While Moyes confirmed that Carrick’s groin problem is improving but he may not feature, Nemanja Vidic, Antonio Valencia and Nani are all on the mend following knocks.
Guardian service

1 Cheltenham faces criticism after racegoers suffer Covid-19 symptoms
2 Ian O’Riordan: Learning to run for the first time all over again
3 Coronavirus crisis could cost the GAA up to €60 million
4 Greener Pastures: Seinäjoki feels most like home for Tommy Dunne
Real news has value SUBSCRIBE