Manchester United keen to offload a string of high-earners

Wellbeck, Young, Hernandez and Kagawa among those in the firing line 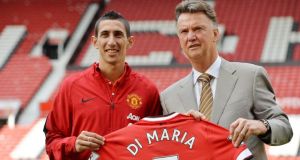 Manchester United are in a frantic final push to recoup as much money as possible before the transfer window closes following Ángel di María’s €75.4 million arrival.

The club are aiming to offload a string of high-earning fringe players, with this driving the decision to allow Danny Welbeck, who could cost up to €25 million and earns at least €100,000 a week, to depart.

United’s determination to add fresh acquisitions before September 1st is also behind the club’s intention to sell.

Targets considered by Louis van Gaal include Sporting Lisbon’s William Carvalho, who would cost €30 million, Juventus’s Arturo Vidal, worth at least € 38 million, Milan’s Nigel de Jong, valued at €12 million, and Ajax’s Daley Blind, who would be at least €22 million.

United’s status as one of the world’s best paying clubs has caused them difficulty all summer to unload players, with salaries that are far higher that previously thought.

This was illustrated by the loan-deal that took Nani, who earns €145,000 a week, to Sporting Lisbon as part of the transfer of Marcos Rojo from the Portuguese club. United agreed to pay the winger’s salary while there, which equates to around €5.55 million per season.

Ashley Young, who the club would listen to serious offers for, earns €145,000 a week.

Javier Hernández, the subject of a bidding war between Valencia and Juventus, has two years remaining on a basic salary of up to €111,000 a week.

Anderson, now back at United following last season’s loan at Fiorentina, and Shinji Kagawa, who is interesting his former club Borussia Dortmund, are also major earners as is Marouane Fellaini, though the latter’s ankle injury means United will not be able to sell him this window. As both players have two seasons left on their terms, the club is due to pay them €9.0 million each.

Tom Cleverley, a target for Aston Villa, is one of United’s lowest earners though his deal is heavily incentivised so can be markedly higher.

As Cleverley’s contract expires in May, any terms Villa offer would have to be attractive or he could choose to wait and leave then as a free agent.

If United were to sell Welbeck, Young, Hernández, Anderson, Kagawa and Cleverley before the end of the transfer window, they would save a total of €585,000 a week.

With the potential departures of Nani and Fellaini in the future, this figure could reach a staggering £646,000 a week that the club would save.

With the 23-year-old having been frustrated at a lack of opportunity at centre-forward since last season under David Moyes, Welbeck has been effectively given little choice but to leave.

The club have stipulated that he cannot join a top six club though if Tottenham Hotspur who are understood to be interested in taking the striker, possibly on loan, were to offer the right deal this would test United’s resolve.

“They are putting the roof on before the foundations of the house,” Wilkins told TalkSport.

“I think they spent the £60m unwisely on Di Maria. Why don’t they go and pay £35m for Hummels first? We know Dortmund, as good a side as they are, are a selling club.

“Take him out of Dortmund and put him in alongside Phil Jones. Then go and get Khedira for £25m. There’s your £60m and you already look more solid.”

While Di María is available for today’s Premier League trip to unfashionable Burnley, his compatriot Rojo is yet to receive his work permit.

Van Gaal said: “Rojo is working on his permit because he has to go abroad for that.

“Now he is abroad in Madrid to work at the embassy, but it takes more time than we expected.” Guardian Service

1 Colin Kaepernick’s exile is too fresh for NFL to speak out on US protests
2 Royal Portrush: Golf clubs ‘in real distress’ as eyes turn to 2021
3 Connell losing touch with club championship is real tragedy of Normal People
4 Rodgers shunned by some family members for leaving Celtic
5 Fitzgerald says inter-county game should resume before club fare
Real news has value SUBSCRIBE