After Sunday’s draw with Chelsea, van Gaal’s United are showing they mean business 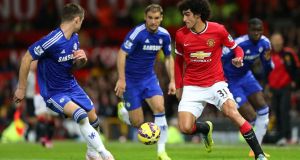 Louis van Gaal was only a few days out regarding his plea for time. Judge his team and his philosophy after three months, he said, when becoming the Manchester United manager.

It was 10 days after this self- imposed deadline that Chelsea left Old Trafford in no doubt that United are heading skywards and Van Gaal means business. Robin van Persie’s equaliser in the fourth minute of added time took the roof off the Theatre of Dreams and sent a message the faithful have waited 18 months to hear: beware United again in the Premier League.

They are 10 points behind Chelsea, who lead Southampton by four and Manchester City by six. So there should be no overreaction to the 1-1 draw. Certainly none was offered by Van Gaal: “We still could have won. We missed an opportunity. That is a pity but I am very pleased we are fighting until the end as a team.”

Wayne Rooney will be back for that. In the three games he has missed because of suspension United have gone win-draw-draw. This is hardly eye-catching but they are unbeaten in four outings as the captain re-enters the fray.

On Rooney’s return, Luke Shaw said: “It’s a massive boost for us. It’s something I think he’s looking forward to. You know Wayne – he hates sitting on the sidelines watching and he’s said that a few times. I’m really looking forward to having him back.”

The positives keep coming for Van Gaal. Against Chelsea Marouane Fellaini excelled in his first start under the new manager and could prove invaluable. Adnan Januzaj, named in the starting XI for a second consecutive outing, showed last season was no fluke with every contribution forward-thinking and classy. After injury Chris Smalling slotted back into defence, Shaw is beginning to appear comfortable at left-back and David de Gea continued his scintillating form.

All of this is without Radamel Falcao – Van Gaal said the kick received in training should not keep the striker out for long – and the full use of the recovering Michael Carrick and Ander Hererra, who were unused substitutes against Chelsea.

City’s dismal 2-1 defeat at West Ham is one more reason for United cheer before the derby. Southampton’s and West Ham’s presence in the Champions League positions is another: both, plus sixth-placed Swansea City, seem likely to fall away. Arsenal and Liverpool, supposedly more serious contenders for Champions League qualification, are only two points and one point better off, respectively.

Amid the manager’s moan at Van Persie’s shirt-off celebration and Jose Mourinho’s criticism of the referee, Phil Dowd, was this nugget from the United manager: “I don’t think yesterday was a good game.

“I said to the players you have seen what they have done because, for example, Barcelona with Luis Enrique is always pressing from behind and even the home side Real were playing from behind. They drop in and are very compact. But after Real scored the second goal the match was over because Barcelona don’t keep compact like they did in the first half. It was deadly.

“Because of that my team, despite the 10 minutes when they lost their heads [against Chelsea], we were always in our shape.”

Van Gaal offered a picture of a united United and of a coach who is constantly teaching and improving the side. After City they face Crystal Palace (home) and Arsenal (away). On December 14th Liverpool are in town. By the end of that match, where United stand will be clearer.

Shaw believes the Van Gaal ethos has taken root. “Yeah, of course,” he said. “We work on it a lot in training so everyone knows what job they have to do. It’s not just this formation, there are a few other formations that we have been working on so we have a couple of formations that we could play but the 4-3-3 looks good at the moment.” – Guardian Service