Man City hold on against Leicester after Mahrez penalty slip 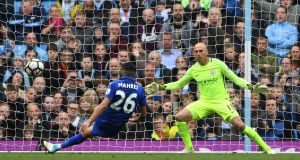 Riyad Mahrez slips as he takes a penalty in Leicester’s 2-1 loss to Manchster City at the Etihad. Photograph: Laurence Griffiths/Getty

Riyad Mahrez’s penalty slip ensured Manchester City did not take a tumble of their own in the Champions League race, moving third with a 2-1 win over Leicester at the Etihad Stadium.

On the fifth anniversary of their first Premier League title win their 2012 hero Sergio Aguero was restricted to a late cameo but a penalty from his heir apparent, Gabriel Jesus, and David Silva’s opener left City with the points.

Shinji Okazaki gave the Foxes hope with a stunning volley before half-time but when Mahrez had the chance to level from the spot 13 minutes from time, he lost his footing and touched the ball into his standing leg.

The effort somehow still ended up in the top corner but referee Robert Madley spotted the infringement and chalked off what would have been a fitting reward for Leicester’s unexpected comeback.

Instead City finally put away their bogey side, who have taken seven points from the the last three games between these sides, including December’s 4-2 thrashing at the King Power Stadium.

City hogged possession from the first whistle but the best early chances came from corners at either end, Fernandinho and Wilfred Ndidi both misplacing headers from good positions.

Leroy Sane was next to spurn a clear sight of goal, dragging wide from six yards after Ndidi’s poor clearance. That was virtually the on blemish on the German’s first-half display, as he menaced Danny Simpson with a kinetic performance on the left wing.

Sane was a fitting creator for City’s 29th-minute opener, though his fine take down and cross would not have been possible without a wonderful cross-field ball from Fernandinho.

Silva arrived to sweep home City’s first for the second match in a row, with Leicester appealing without success for an offside flag against Raheem Sterling. The England winger had flung a boot at Silva’s shot without making apparent contact.

City’s second came seven minutes later, Sane’s quick feet taking him into the box where he was taken out in comprehensive fashion by Yohan Benalouane. In Aguero’s absence Jesus stepped up, slotting home after a gentle approach for his fifth City goal.

Leicester might have hunkered down for half-time but instead conjured a remarkable response, Okazaki rifling his unstoppable tumbling volley past Willy Caballero after Marc Albrighton’s cross. After 23 games without a goal, it was almost worth the wait.

Leicester were buoyant after the break, creating quick counters through Jamie Vardy, Okazaki and Ben Chilwell as the City swagger evaporated.

By the time Gael Clichy needlessly floored Mahrez on the edge of the box, the visitors were well worth their shot at an equaliser.

They were one good connection away but Mahrez could not hold his footing and neither Caballero nor Madley missed the double contact.

Aguero had 12 minutes — plus seven for stoppages — to mark City’s famous date in style but the suspicion remains that Pep Guardiola sees the Argentinean as part of the club’s past rather than a central figure of the future.