Manchester United snapped up winger before he signed for PSG 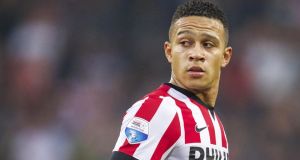 Louis van Gaal has admitted some of his Manchester United players will not respond well to the competition provided by the signing of Memphis Depay or any new player because the manager says it can be “too much pressure”.

The winger is due to join United at the close of the season for around £25 million from PSV Eindhoven. Van Gaal revealed he was forced to intervene to acquire Depay now or the 21-year-old would have signed for Paris Saint-Germain and the manager does not think the impending arrival will spur on all his current squad.

Van Gaal said he did not want to finalise the deal until the end of the season. “I have been forced to sign him. I don’t want to sign him before the end of the season; we have to focus on our games. The coming matches are very important for Manchester United. But because of the market I must handle it because otherwise he would have signed for PSG. That is why I signed Memphis,” he said, adding that his close relationship with PSV made an early deal possible.

Arsène Wenger, meanwhile, says Arsenal have no plans to sell Theo Walcott at the end of the season and confirmed talks are ongoing with the England forward over a new contract.

Walcott has a year left on his deal and has been linked with a move to Premier League rivals Liverpool but the Arsenal manager says he has not contemplated selling the 26-year-old if the player does not commit.

“We are already talking to him,” he said. “When you go into negotiations with a player it is with a desire for him to stay. He looks keen to do it and I am keen to do it.” Guardian Service

1 Ireland suffer Twickenham torture yet again as England dominate
2 England 24 Ireland 12: How the Irish players rated at Twickenham
3 England held all the aces in defining battle of the breakdown
4 TV View: Sunday Bloody Sunday . . . Not Bono’s fault but Boy, that was Bad
5 Mayo left licking their wounds as Monaghan roll on
Real news has value SUBSCRIBE