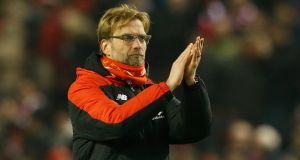 Liverpool are considering raising their €32 million bid for Alex Teixeira, as Jurgen Klopp admitted a new addition this month would have ramifications for his existing strikers in the summer.

Anfield officials remain in negotiations with Shakhtar Donetsk over Teixeira despite disparities in their valuations of the 26-year-old being made clear during talks in Florida this week. Shakhtar want €50 million for the Brazilian forward and believe keeping the player until the end of the season, when more clubs will be in the market, would help secure that sum.

Liverpool are the only team to make an official offer for Teixeira so far but accept it may take an increased bid to test Shakhtar’s resolve over a player keen on a move to the Premier League.

Klopp kept his customary counsel over Liverpool’s transfer business yesterday and refused to discuss Teixeira, who has scored 22 goals in 15 league games for the Ukrainian club this season. The manager did, however, concede Liverpool’s injury list had “changed everything” regarding the January transfer window and that plans for the summer had been advanced because of their problems in attack. “If we find a solution which fits for both transfer windows, winter and summer, and a player could help us as quickly as possible then of course we would try,” he said.

The Liverpool manager is adamant he will not “sign a lot of rubbish” this month. But Klopp admitted he will have decisions to make on his striking options this summer should reinforcement arrive this month.

“First of all we have January, a few days still, and the season ends in the middle of May,” he said. “I don’t know what will happen in May. We cannot change now everything, take all the players [who are available] and then in the summer think: ‘Ah, that is not so good.’ We always have to think about the situation now, who possibly can help, plus who can help us from next season on for the next three, four, five years. In the summer we will have to make decisions, that is normal.

“Right now my job cannot be to say: ‘I think in the summer we will sell him and sell him.’ I don’t think about it now but we have to always think about the general situation. I am interested in the development of the whole club. I am interested in the under-21s, the under-18s and I know the first job is to take each point you can get. To do this you have to leave a space for young players and give them a chance. That is how you build a squad. And you need a little bit of luck. Now we have to work on this situation and then in the summer, believe me, we will be prepared for the next season.”