Leicester forced to battle hard for point by West Brom 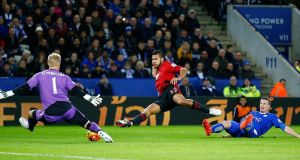 At the end of a tense, pulsating match, Claudio Ranieri took a couple of steps on to the pitch and then started to applaud his players for their effort. His team had given everything and, on this evidence, nobody should dare to question their nerve or spirit of togetherness but, ultimately, it has to rank as a disappointing result for the team chasing the most implausible title of the Premier League years.

The bare facts are that Ranieri’s men have taken only four points from their last three games and Tottenham Hotspur now have the chance to replace them at the summit by winning at West Ham on Wednesday night.

Leicester had to come from behind after Salomon Rondon’s early goal and having turned the game upside down before half-time courtesy of Danny Drinkwater’s deflected effort and a goal for Andy King they will be desperately frustrated that Craig Gardner’s free-kick denied them the victory that would have moved them five points clear.

At the same time, it was some effort Leicester put in during a dramatic late onslaught and, by the end, they had at least answered some of the questions about their strength of personality. Wes Morgan, their centre half, spent part of that period operating as an auxiliary striker and would have won the game but for a splendid save from Ben Foster, showing his qualities in goal for a typically industrious West Brom side

These are the moments when potential champions have to prove they can cope when the heat of the battle is rising dangerously close to intolerable. Leicester also had to do it without N’Golo Kante, their brilliantly energetic midfielder, and were playing a side that pride themselves on being obdurate opponents.

Tony Pulis had packed his defence with four six-footers. His team were lined up in an old-fashioned 4-4-2 with the central midfielders, Darren Fletcher and Claudio Yacob, rarely straying too far forward, and when they took a 12th-minute lead it was clear this was going to be a night when Leicester needed to show all their competitive courage.

The goal was the first Leicester have conceded at home since Loic Remy scored here for Chelsea on December 14th, a run lasting seven hours and 55 minutes in match time, and it was unusual to see their defence being opened up so easily.

Fletcher’s through ball was weighted beautifully but Rondon still had to beat Robert Huth for pace and, even more impressively, outdo the German in a battle of body strength. There are not many strikers who get past Huth that way but Rondon is built like a backstreet bouncer. Huth was knocked aside and, as Kasper Schmeichel charged to the edge of his penalty area, Rondon turned the ball through the goalkeeper’s legs.

Would Leicester wilt? Could they deal with the pressure? The answer was emphatic. Ranieri’s men quickly shook their heads clear and, for all their skill and commitment, they also had the kind of good fortune that all sides in their position need.

After 31 minutes, King played the ball into Drinkwater’s path and his shot, from 30 yards out, did not carry any real threat until Jonas Olsson jutted out his boot. The deflection inadvertently sent the ball looping over Foster and suddenly the complexion of the game changed.

Within six minutes, Jamie Vardy’s header had come back off the crossbar from Drinkwater’s left-wing delivery and there were more encouraging signs for Leicester. Shinji Okazaki was a difficult opponent to pick up, with his bustling running style, while Marc Albrighton and Riyad Mahrez were stretching the game on the flanks.

Both wide players were involved in King’s goal and the touch from Mahrez to set him up was exquisite. Albrighton had played the ball from left to right and Mahrez judged it perfectly to set up a player who epitomises the story that has been unfolding in this part of the east Midlands. Nine years ago this week, King was part of the Leicester side facing Stockport County and Cheltenham Town in League One. Now he had the ball at his feet, inside the penalty area, and swept a first-time shot past Foster.

That was in first-half stoppage-time but it was only five minutes after the restart that West Brom punctured the mood for a second time. Mahrez had been penalised for a handball and Gardner’s free-kick was struck expertly with just the right amount of pace and curve to find the top corner. Schmeichel did not move and, once again, it was tempting to wonder how Leicester’s nerve would hold out.

They responded straight away with another wave of attacking but Okazaki really ought to have done better when he headed Albrighton’s cross against the crossbar from six yards out.

Yet this was not a night when Pulis could be accused of ultra-defensive tactics. Rondon’s physical presence created plenty of problems and he will probably feel he should have scored again with a close-range effort midway through the second half.

West Brom were trying to win three league fixtures in a row for the first time since November 2012 and might also be aggrieved that Leicester’s left back, Christian Fuchs, was spared for a couple of challenges that should have led to action from the referee Mark Clattenburg.