Premier League round-up: Long, Walters and McClean among the goals 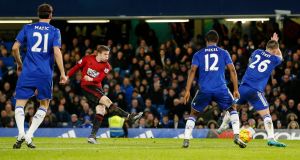 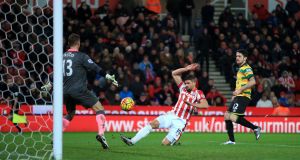 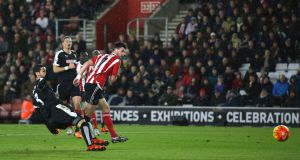 Second-placed Leicester joined Arsene Wenger’s side on 43 points thanks to a 1-0 win at Tottenham.

Centre back Robert Huth headed home from a corner with seven minutes remaining to end the Foxes’ six-hour wait for a goal and give them three points in north London.

Manchester City were unable to trim the gap on Arsenal, who they remain three points behind, as they were held to a 0-0 stalemate with Everton at the Etihad Stadium.

Jermain Defoe scored his first Premier League hat-trick since November 2009 to guide Sunderland to a 4-2 win at 10-man Swansea that boosted the Black Cats’ survival hopes.

The former West Ham and Tottenham striker grabbed two goals in the victory over Aston Villa in Sunderland’s previous league match and their revival continued in south Wales.

After Defoe and Gylfi Sigurdsson, with a penalty, had traded goals, Kyle Naughton was sent off for the Swans, who went ahead anyway before half-time through Andre Ayew.

However, Patrick van Aanholt levelled things up once more before Defoe struck twice more to move Sunderland just one point away from safety.

Stoke also took advantage of a red card to move up to seventh courtesy of a 3-1 victory over Norwich at the Britannia Stadium.

Gary O’Neil’s 31st-minute wild hack on Ibrahim Afellay left the Canaries up against it and Jonathan Walters soon gave the Potters the lead.

And although Jonny Howson equalised, Joselu restored Stoke’s lead with just his second goal for the club before Ryan Bennett’s own goal sealed the three points.

James McClean earned West Brom a share of the spoils at Stamford Bridge as the Baggies drew 2-2 with Chelsea.

The Blues had led twice, through Cesar Azpilicueta and a Gareth McAuley own goal, but Craig Gardner and McClean were on target for Tony Pulis’s men to ensure a point apiece.

Watford lost a third straight game as they went down 2-0 to Southampton, who scored in either half through Shane Long and Dusan Tadic.