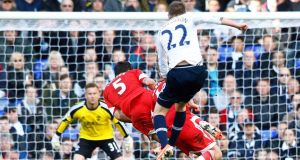 Gylfi Sigurdsson put a gloss on a match that for a long time unfolded like a summary of the past four months for Tottenham. Spurs blended sprinkles of excellence with bouts of cluelessness and seemed on course for a suitably inconclusive result until Sigurdsson averted the draw with a spectacular strike in stoppage time.

That winning goal was reward for Tottenham’s spirit as much as any skill, as it crowned a comeback from a calamitous first half an hour during which Southampton went two goals in front and could have led by more.

The fightback felt like vindication for Tim Sherwood, who came into the game looking forward to another opportunity to present the case for allowing him to remain in charge of Tottenham beyond the summer.

His Premier League managerial career began at Southampton in December, when his team also triumphed 3-2, but his side’s form has fluctuated between encouraging and wayward since then.

The opening half hour was an endorsement of Pochettino’s methods, as Southampton played like a slick ensemble that enables talented individuals to flourish. Like a true team, in other words. Their early fluency contrasted with the well-intentioned but spluttering moves of Tottenham.

Tottenham were too often guilty of haphazard passing in the first half and the visitors were more than happy to take advantage.

Aerial power
Tottenham missed the injured Emmanuel Adebayor’s aerial power up front but Roberto Soldado was endearing himself to the White Hart Lane faithful by serving as a clever fulcrum when the ball was played to his feet.

The error that led to Southampton’s opening goal could hardly be attributed to sloppy teamwork — it was just a basic blunder by Kyle Naughton, who misjudged a long kick by Boruc, allowing the ball to bounce over him and into the path of Jay Rodriguez.

The forward then curled a lovely low shot beyond Hugo Lloris and into the far corner. Southampton were looking likely to increase their lead even without the help of the hosts but, in the 27th minute, another mistake by Naughton aggravated Spurs’ problems.

A loose ball by the right-back fell to Lambert, who fed Lallana yet again and this time the playmaker finished emphatically from 14 yards with a well-placed shot.

An enraged Sherwood abandoned his seat in the stands and stormed down to the sidelines to vent his spleen. Naughton may have taken some of the sting out of the tongue-lashing he was likely to get at half-time by helping Spurs to cut the deficit immediately.

The full-back crossed from the right and this time it was a Southampton defender who goofed, Nathaniel Clyne botching the clearance and allowing the ball to run to Eriksen, who rammed it into the net from close range.

Sherwood, you suspect, still gave full voice to his anger during the break and his team soon cheered him up. Two minutes into the second period feeble Southampton defending enabled Spurs to equalise. Soldado outmuscled Dejan Lovren as the Croatian tried to let the ball run out of play near the corner flag and the striker’s low cross was allowed to run across the face of goal to Eriksen, who gratefully tucked away his second goal.

Now confidence coursed through Tottenham and consequently their play flowed more smoothly and showed more attacking verve. They took a grip of central midfield, where Sigurdsson was introduced for Mousa Dembele.


Wasteful play
Chadli and Eriksen both blasted efforts into the side netting after swift attacks. Eriksen then fired wastefully over from the edge of the area after being given a clear run on goal in the 69th minute.

But Southampton eventually steadied themselves and began to chase victory. Lambert nodded over from six yards and then, in the 88th minute, went even closer, flashing a powerful drive inches wide after a period of sustained pressure. A draw would have been a suitable outcome but Spurs were not content to settle for that. In the second minute of time added on, Sigurdsson ignited jubilation at White Hart Lane by collecting a pass from Eriksen and firing low into the net from 25 yards.
Guardian Service