Jurgen Klopp: ‘Alex Ferguson is the John Lennon of football’ 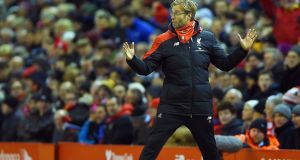 Jurgen Klopp has described Alex Ferguson as the “John Lennon of football” and arguably the greatest manager the game has seen ahead of his first encounter with Manchester United.

Ferguson admitted he was worried about the prospect of Klopp reviving Liverpool’s fortunes when the German coach was appointed as Brendan Rodgers’ successor last year. The mutual respect between the pair was evident as the Liverpool manager welcomed Ferguson’s concern, though conceded he still had to justify it at Anfield.

Klopp said: “I had a few really good moments with Sir Alex. It’s a big honour to talk to Sir Alex. For a manager it’s nearly the best thing you can do, to sit there and listen. I needed 10 minutes to understand what he was saying and then it was OK.

“Maybe he is the greatest ever, the John Lennon of football or something like this. From my side there is a big amount of respect. What he did in his life as a manager is not easy for someone else to do it.

“What he said about me? I don’t know. I think it was positive because we had a good time together. It is good that he is concerned but I have to prove it. We need a little time. We can make a big step but not the biggest step. It is Man United, there is enough to think about.

“It’s a special game for me, the players and the club. I enjoyed the atmosphere against Arsenal but we can do better. Everybody who was in the stadium on Wednesday, if he or she can get tickets again then do it again.”

Liverpool host United at Anfield on Sunday in the first meeting of the sides under Klopp with the visitors sixth in the table, three points ahead of the ninth-placed Reds.

The fixture has been marked by hostility in recent years but it is not unprecedented for the managers to hit it off.

In 2001 Ferguson visited Gerard Houllier in hospital after the Frenchman underwent heart surgery and it wasn’t unknown for the former Liverpool player Matt Busby to share a team coach with his fellow manager Bill Shankly after the pair formed a mutual Scottish admiration society in the sixties.

Ferguson, of course, will have as much influence on Sunday’s game as the former Beatle and, despite Louis van Gaal’s problems at Old Trafford, Klopp insists the present United will pose a formidable test at Anfield.

The Liverpool manager, who faced van Gaal as Bayern Munich coach during his time at Borussia Dortmund but has never competed against United, said: “I am not too close with news about United. Louis van Gaal is one of the most successful managers in world. He has won a lot of titles, not only in Germany. He has a special idea about football and we have to respect him as an opponent.

“We have met a few times and had some intensive games. We both want to be successful and both need to work towards getting there. It’s a different idea about football but I wouldn’t say that one is a better idea. We have similar possession in games I think but we are different characters. He is more experienced, I am bit more lively on the sideline which maybe isn’t all good. The good news for everyone is that it’s not one-on-one, Jurgen Klopp versus Louis van Gaal.

“A game against Man united is a bit like Dortmund v Schalke. It is important for the table, we are close together and both need the points to stay close to top of table, but it’s Manchester United. It would not be important for the table if we had a 20 point lead at the top but this game would be important still. I love derbies to be honest. It’s the salt in the soup. They are the best matches to perform.”

Klopp admitted that part of a manager’s job is to produce entertainment on the pitch - not something that has been associated with United under their Dutch coach this season.

“I said after the Arsenal game I don’t like 3-3 too much but when the game is over everyone likes it, a lot of action in it, a lot of goals - that’s what it should be. It would not be the same game if people went into the stadium and only thought about tactics, like this player needs to move three yards left, or four yards right.

“Football not the most complicated game in the world. I like football because of those moments you can enjoy -that is not only a perfect goal, it is a perfect challenge, header, atmosphere in the stadium, that is what I like in football and it’s our job to do it as often as possible.