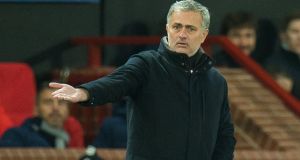 Jose Mourinho has defended his Manchester United record in an extraordinary 12-minute monologue after being widely criticised in the wake of the team’s Champions League defeat by Sevilla.

He said the club’s “football heritage” of recent poor European performances meant there should be no surprise at Tuesday’s last-16 exit. The manager also said he was going nowhere and pointed out it was only 10 months since he won a trophy.

Mourinho defiantly read a prepared sheet of statistics regarding United in Europe since 2011, when they reached the final.

“There is football heritage,” he said. “And what [I inherited] is the last time Manchester United won the Champions League, which didn’t happen a lot of times, was in 2008. Since 2011: 2012 out in the group phase. In 2013 out at Old Trafford in the last 16, I was on the other bench [as Real Madrid manager].

“So in seven years with four different managers, once not qualify for Europe, twice out in the group phase and the best was the quarter-final – this is football heritage.”

Mourinho then pointed to United’s Premier League record and that of Manchester City’s. He claimed he inherited an inferior squad to the one Pep Guardiola did at City. “The last victory was ’12-’13 and in the four consecutive seasons United finish seventh, fourth, fifth and sixth. So in the last four years the best was fourth. This is football heritage.

“Do you know what is also heritage? Is that [Nicolas] Otamendi, Kevin De Bruyne, Fernandinho, [David] Silva, [Raheem] Sterling, [Sergio] Agüero, they are investments from the past, not from the last two years [when Guardiola took over]. The United players that left the club last season; see where they play, how they play, if they play,” he said of Wayne Rooney, Adnan Januzaj, Bastian Schweinsteiger, Memphis Depay, Morgan Schneiderlin, Victor Valdes, Paddy McNair, Henrikh Mkhitaryan and Donald Love.

“That’s football heritage and one day when I leave, the next Manchester United manager will find here [Romelu] Lukaku, [Nemanja] Matic, of course [David] De Gea from many years ago.

Mourinho bullishly alluded to his record. “There is a [saying] that I like: every wall is a door. I am not going to run away or disappear or to cry because I heard a few boos, I’m not going to disappear from the tunnel, running immediately. The next match I will be the first to go out. I am not afraid of my responsibilities.

“When I was 20 I was nobody in football, I was somebody’s son, with a lot of pride, and now at 55, I am what I am. I did what I did because of work and because of talent and my mentality.

“So they [critics] can be together. I understand that for many years it was really hard for the people who don’t like me because it is: ‘Here he is again, here he wins again.’

“For 10 months I win nothing, the last title that I won was 10 months ago, I beat Liverpool, Chelsea, I lose against Sevilla and now is their moment to be happy. I learn in my religious formation, be happy with others’ happiness; so be it, I am a really happy guy.” – Guardian service