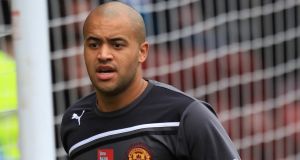 Republic of Ireland goalkeeper Darren Randolph has agreed a move from Motherwell to npower Championship side Birmingham City.

The Fir Park number one will quit the club at the end of the Clydesdale Bank Premier League season after penning a two-year-deal with the Blues.

The switch brings to an end three years at Motherwell — which saw Randolph keep 46 clean sheets in 136 appearances — as he prepares to join up with his new team-mates at St Andrew’s on July 1st.

The 26-year old told Motherwell’s website: “Following three fantastic years at Motherwell, I wanted to put on record my sincerest thanks to the staff and fans at Fir Park for their great support during my stay at the club.

“With my contract due to expire at the end of the month, and after discussing my future with close friends and family, it now feels like the right time to seek a fresh challenge.

“I will be taking some great memories with me and hope that I will still be welcomed back to the club in the future. I will certainly keep an eye out for Motherwell’s results next season and beyond.

“When I joined the club in 2010 from Charlton Athletic, I was told on day one that I had big gloves to fill with the departure of John Ruddy, and looking back over the past three seasons, I hope the fans feel I achieved that.

“As widely reported, I have decided to start a new chapter of my career down south with Birmingham City where I will be replacing another great goalkeeper in Jack Butland (Stoke City).

“I’ll no doubt have a new set of fans to impress and that is a challenge I am very much looking forward to taking on. Once again I can’t thank the fans enough, they’ve been great to me from my first game to my last and that is something I won’t forget.

“The club is in good hands moving forward and I would like to wish the board, staff and players the best of luck for next season and the years ahead.”

The move was also confirmed by Birmingham, with Randolph telling www.bcfc.com: “It feels brilliant to be a Birmingham City player. I’m just happy to get it all done and I’m looking forward to getting started. “I wanted to come here because of the size of the club and it would be great to be a part of a club like this. The manager (Lee Clark) wants to achieve things at this club and after speaking to him I was sold. I’ve proven myself in the SPL and now it’s time that I came down here and did the same in the Championship.”

Randolph has made one appearance for Ireland, having represented his country throughout underage levels. He remains behind David Forde and Keiren Westwood in the senior pecking order.