Hull fully expose Liverpool’s problems at the back

David Meyler among the goalscorers at the KC Stadium 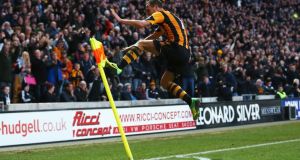 Hull City 3 Liverpool 1: Champions League aspirations can turn on days to regret such as this. Liverpool awoke to news that Daniel Sturridge is facing a lengthy lay-off and then produced a truly woeful display in his absence as Hull City recorded an emphatic victory. Tigers is a sore subject in these parts at present, but this was a mauling from Steve Bruce’s side.

Hull had scored only four league goals at the KC Stadium all season but almost equalled that tally in one afternoon courtesy of a polished performance and inept Liverpool defending.

Brendan Rodgers had denied before kick-off there was anything wrong with Liverpool’s defending but conceding three goals for the second game in succession must surely prompt a rethink.

Liverpool’s worst fears over Sturridge were realised with confirmation from Rodgers that the 11-goal striker will be out for “six to eight weeks” with an ankle-ligament strain. The loss of Sturridge would be a serious blow at any time, but will be keenly felt over a demanding winter period that includes trips to Tottenham, Manchester City and Chelsea.

It was not the only fitness problem for Liverpool at the KC Stadium, where Philippe Coutinho was on the bench having not trained all week due to an ankle sprain.

Further upheaval arrived courtesy of Rodgers’s decision to recall Kolo Touré at the surprising expense of Daniel Agger, meaning Martin Skrtel had to shift across central defence, plus opportunities for Victor Moses and Raheem Sterling to stake a claim. The changes were reflected in a laboured display from the visitors who, despite dominating possession and forcing several corners early on, rarely threatened to break a disciplined Hull defence.

Bruce needed a reaction to two successive defeats, including a first home loss of the season to 10-man Crystal Palace last weekend, and used his programme notes to appeal for unity in the face of owner Assem Allam’s attempt to rebrand the club Hull Tigers.

“I am aware of your frustrations at recent happenings at the club,” the manager wrote, “but let’s not make it a distraction.”

Sadly for Bruce, his request was undermined by Allam’s criticism of the ‘City Till We Die’ campaign group in a Sunday newspaper. “They can die as soon as they want,” said the Egyptian-born businessman, “As long as they leave the club for the majority who just want to watch good football.”

Allam’s inflammatory comments at least ensured a bristling atmosphere at the KC Stadium. “We’re Hull City, we’ll die when we want,” was a fine riposte from the home support.

Hull were not distracted from the task at hand, however, as Bruce’s switch to a three-man central defence injected much-needed insurance against Luis Suárez and his team scored with their first shot on target. Curtis Davies had glanced the game’s opening chance wide of Simon Mignolet’s goal from an Alex Bruce cross before Moses lost possession cheaply inside the Liverpool half. Jake Livermore took over, exchanged passes with David Meyler and tried his luck from 22 yards. Luck was on the midfielder’s side and the ball looped over Mignolet via Skrtel’s calf.

Bruce was submerged beneath his coaching staff in the celebrations but, having seen Hull cope comfortably with the Liverpool attack, he was rightly infuriated by one moment’s lapse in concentration.

Hull’s defenders hesitated a fraction too long over a loose ball outside their area, allowing Jordan Henderson to intercept prior to a clattering foul from Davies. Steven Gerrard swept an emphatic free-kick around a crumbling wall – constructing one appears a lost art in the Premier League at present – and into the bottom corner of Allan McGregor’s goal.

Parity did nothing to improve the Liverpool performance and it was Hull who showed more composure on the ball plus intent in the final third. Davies went close with another header, Tom Huddlestone almost capped a fine display with a goal from 20 yards and after McGregor had saved superbly at point-blank range from Moses, the home side regained a deserved lead.

Weak defending from Liverpool proved a valuable assist. Davies and Yannick Sagbo caused chaos under a long ball into the visitors’ area and Touré flicked a poor clearance straight to Republic of Ireland midfielder Meyler who, after one blocked attempt, drove his second bite low into the far corner.

Suárez almost levelled with his latest sweeping free-kick from distance but the clearer chances came to Hull against a ponderous Liverpool defence. Sagbo should have scored, or at least squared to Elmohamady, when sent clear after Liverpool substitute Luis Alberto lost possession but the striker made amends within seconds.

Collecting a hopeful clearance downfield, the striker attacked Skrtel and eventually found Huddlestone arriving into the area. The midfielder flicked a tame effort that was heading wide until Skrtel threw himself in the way and, for the second time, diverted a shot beyond his own goalkeeper.