Harry Arter reaps rewards of his and Bournemouth’s hard work 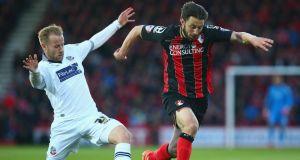 Bournemouth’s Harry Arter on the ball ahead of Barry Bannan of Bolton during the English Championship match at Goldsands Stadium which Bournemouth won 3-0 and effectively gained promotion. Photograph: Getty Images.

Having celebrated into the night after beating Bolton 3-0 on Monday night, Bournemouth’s players were back training again on Thursday. Working hard, says midfielder Harry Arter, with a view to clinching the Championship title this afternoon in the event Watford slip up.

Eddie Howe’s men head to Charlton, the club where Arter started out before being let go seven years ago after just one senior appearance. A year in the Conference followed and the story of the 25-year-old’s subsequent comeback is almost as dramatic as that of the club he plays for. The Valley seems a pretty appropriate place for the Championship chapter to close.

“Yeah, there is something quite special about it in a way,” he acknowledges. “I suppose it feels like a fairytale finish. Being released by a club then going back there with your new team that’s just been promoted to the Premier League.

“There is that sort of fairytale side of it but honestly I don’t really feel any different going back there,” he continued however. “It’s a club that’s changed a lot and there’s not really a lot of people left there that I know so I won’t feel any different.”

He will, to be clear, feel good. After Charlton, Arter’s taste of non-league football with Woking had the Londoner contemplating a career outside of the game. He gave himself a year, he says, to prove he was good enough to bounce back and gave it his all. The following summer Swindon and Bournemouth both came calling and in the end it was his meeting with the latter’s young manager that made the midfielder’s mind up.

“I like to think that we’ve helped each other along the way but I’m certainly thankful to him for all the help he’s given me along the way. I literally have thanked him personally for it – all the hard work that he’s put into my game to make me a better player.”

At the time, Bournemouth were still working their way back from a financial crisis that had almost finished the club off. They had just won promotion to League One but the notion they might one day reach the Premier League was simply too far-fetched to merit a mention in the manager’s sales pitch.

“No, the club’s philosophy at the time was to develop young players, make them better and sell them on,” he says. “That’s how the club stayed afloat for a few years and that’s what everybody’s ambition at the club was, to become a better player and move on.

“There was no beating around the bush really and that was the manager’s message to me to an extent. Obviously he wanted the club to be successful but if a player started doing well for Bournemouth then it wasn’t going to take a big fee for them to leave. That was more or less what was mentioned to me – work as hard as you can, do as well as you can and hopefully the club can move forward but if they don’t then you’ll get your rewards.”

Howe left but was brought back after a difficult stint at Burnley by new owner Maxim Demin and gradually things began to change.

“Suddenly, instead of the sense that if you play well you’re going to get sold there were new contracts given to players that were good enough to keep them at the club, that hadn’t happened at the past.

“All the stuff around the club and the ground improved, got a bit more professional, and that makes you feel more settled. The atmosphere was nice, it made you wanted to do well with them.”

The club started this season, its second in the Championship, aiming for the play-offs but after a good run in late September and October the players, Arter says, really started to believe they could go all the way. He had a run himself in mid-season in which he scored in five successive league games that yielded all 15 points but still reckons his highlight came a little later.

Progressing a Republic of Ireland international career that thus far extends only to a handful of underage caps as a teenager and a place on the bench for the recent European Championship qualifier against Poland is important, he says, and Premier League experience should help, although he respectfully acknowledges that the players he needs to displace have plenty of that already.

Just being in the Premier League, though, is good enough to be getting on with and Arter is relishing the prospect. It will, of course be a huge challenge with many happy to write Bournemouth off before they even get going but the midfielder, while excited, is not in the least bit overawed.

Bournemouth’s fans last week voted him their player of the season, quite a compliment in such a good year. And if the club is everybody’s favourite story just now then Harry Arter, Howe apart perhaps, is a strong contender for its most compelling character.

A beautiful, happy accident - Moneyball is the best sports movie ever 10:00
Michael Walker: Carrying space and the benefits of learning to stand still 08:00
Matt Williams: We all need a bit of Bud Maher’s resilience right now 07:00
Ian McKinley: ‘You do take for granted the simple things in life’ 07:00
Reality Bites – Tales from the new normal: Caitríona Cormican 06:00

1 Ian McKinley: ‘You do take for granted the simple things in life’
2 Reality Bites – Tales from the new normal: Caitríona Cormican
3 Nicholas Quinn: ‘Swimming became how I dealt with grief’
4 James McClean still failing to learn his own online history lesson
5 A beautiful, happy accident - Moneyball is the best sports movie ever
Real news has value SUBSCRIBE