Will Mourinho let him play his natural game? Brazilian also has history of doping ban 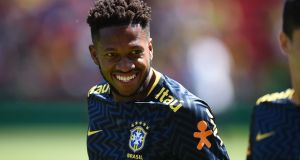 Brazil’s midfielder Fred at Anfield in Liverpool for an international friendly with Croatia on Sunday. Photograph: Oli Scarff/AFP/Getty Images

Manchester United have made a habit of getting creative when unveiling signings in recent years. Stormzy was called in to help announce Paul Pogba’s return, and Alexis Sánchez played Glory Glory Man United on a grand piano, for some reason. But if they don’t introduce their latest arrival by dressing him in a Fred the Red suit, their marketing department should take a long hard look at themselves.

On the face of it, the Brazilian midfielder Fred – or Frederico Rodrigues de Paula Santos, to use his Sunday name – seems an ideal addition for United, who confirmed on Tuesday that they had reached an agreement with Shakhtar Donetsk to sign him for a reported fee in excess of €57 million. Next season plenty of the Premier League challengers will feature box-to-box midfielders who are destroyers and creators at the same time. Chelsea already have N’Golo Kanté, Naby Keïta is on his way to Liverpool, and now United are about to sign Fred.

United have lacked a player with both dynamism and skill: most of their midfield and creative options have one but not the other. Fred is a player who not only runs relentlessly – “I know that I have to run all the game and don’t stop, or I will be useless to the team,” he said recently – but gets the ball then moves it forward quickly and accurately. That is exactly what they have been missing.

The player most frequently compared to Fred is Fernandinho – understandable given their similar backgrounds and that the two speak regularly, but they are different types of players. Fred is more dynamic and less defensively minded but is less experienced and not as positionally savvy. Not that he seems particularly bothered about the slightly reductive parallel. “I will not hide that I like comparisons, because he is my role model,” he said in 2016. “To repeat his path is the dream of any footballer.”

Fred began as a left-back before moving into midfield when he joined Internacional in 2011, a move facilitated by Ronaldinho’s brother Roberto de Assis. Naturally left-footed but comfortable on his right, perhaps his main appeal is how quickly he moves the ball, rapidly shifting from defence to attack. If he is allowed to play his natural game, he could form part of a thrilling and penetrative attacking unit.

That might be quite a big “if”, though. Fred said of Shakhtar’s coach, Paulo Fonseca, not long after the Portuguese was appointed in 2016: “He allows me to freely perform the functions of the midfielder: both attacking and defending. I am now a conductor. The coach trusts me.”

On that basis, you would be forgiven for being concerned about whether Fred will be allowed to play his natural game by José Mourinho, a manager in whose teams the conductor stands on the sidelines, not on the pitch. One of Fred or Mourinho will need to adapt.

Similarly, he will have to get used to Pogba. Fred was at his best for Shakhtar being the conduit between a true defensive midfielder and a genuine number 10. United have the former, in Nemanja Matic, but Pogba is, as ever, a little more of an enigma. Patience might be required in the tricky early months. Fred’s temper may be an issue too: in 26 games last season he was booked 11 times and sent off once.

A more fundamental concern might be exactly how good he is. The quality of the Ukrainian league has dropped since Fernandinho’s day, so Fred will need some time to adapt to the Premier League. He is clearly a fine player but it is tricky to assess whether he will significantly improve United, who are also close to signing the 19-year-old Porto right-back Diogo Dalot.

The other red flag might be that Fred served a doping ban, which ended last summer, after testing positive for the diuretic hydrochlorothiazide at the 2015 Copa América. It is something that can be used as a masking agent rather than being a performance-enhancer, but the explanation that it came from medication to help with headaches he suffered on aeroplanes cut no ice with the anti-doping authorities.

Still, if you’re a glass-half-full person, you could spin the saga as a positive. Fred hit the ground running after his suspension, seemingly unfazed. From there, he worked to get into Brazil’s World Cup squad, even after being left out for two friendlies earlier this year. “I didn’t give up when Tite didn’t call me on games against Japan and England, ” he said. “The main thing in football [is] to fight for your place in the team. So, I will fight.”

It’s also worth mentioning that, unlike some others who have passed through Shakhtar’s shop window, Fred has not excessively agitated for this move. When Manchester City’s interest failed to turn into something more concrete in January, he surprised many by waiting, insisting that he would only leave if the “right offer” came in for the club.

United’s new Fred the Red could be an inspired choice, given time, and one that comes with the blessing of his national coach. “If I was a manager,” said Tite this week, “I’d ask to sign him as well.”