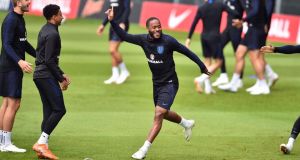 Gareth Southgater has said Raheem Sterling has the support of the rest of the England camp. Photograph: Glyn Kirk/AFP

England boss Gareth Southgate has backed Raheem Sterling to come through the controversy surrounding his gun tattoo and stay focused on final preparations for the World Cup.

The 23-year-old Manchester City forward has been under intense scrutiny during the past week after it emerged he had a tattoo of a gun on his right leg.

Sterling explained the new ink in an Instagram post, revealing it is a tribute to his late father.

The Football Association has supported Sterling since the body art was highlighted on The Sun’s front page earlier in the week and the player trained with the tattoo on display.

Southgate was quizzed on Sterling’s tattoo at his Friday afternoon press conference ahead of Saturday’s friendly against Nigeria at Wembley.

“He knows he’s got our support, he understands how some people have perceived the tattoo. But in my view a tattoo is like any work of art. It’s a very individual meaning, the intent is all with the individual and the person,” the England manager said.

“What has been clear by his own statement and his own experiences is that he is not someone who supports or wants to promote guns in the way that was perceived at first.

“It’s something he’s had to get on with this week, but he’s a very strong individual and he’s looking forward to the game.”

Sterling’s father was shot dead when he was two and Southgate paid tribute to the strength of character he has shown to reach the top.

“I think the personal story of a lot of our players is quite remarkable. People often highlight the issues, the faults, of all of the squad, but for so many of them it’s incredible they’ve got to the point they have,” he added.

“They are a great example to young kids of what you can achieve with your life if you are dedicated, if you are focused.

“Raheem embodies that. Nothing is given to you in life, you have to fight all the way.”

“This England team is a tight-knit group, we stick together through the ups and downs, the negatives and the positives.

“But at this point in time it’s all about positives vibes from our side and we’re looking at the World Cup as a big test for us.”

Southgate confirmed Lingard, who appeared alongside his manager at the press conference, would start against Nigeria.

The England boss, though, insisted he was not in a straight fight for a first-team place with Tottenham’s Dele Alli.

“I don’t see it as a straight contest between any individual, absolutely they could play together,” he said.

“All of our attacking players have different attributes or strengths. Jesse is a fantastic player at recognising the space, working away from the ball, a great link between midfield and attack.”

Southgate put his England squad through their paces on Friday, with Phil Jones absent after leaving the camp to attend the birth of his child. The Manchester United defender is also set to sit out Saturday’s game.