Everton show up all of Newcastle’s faults at Goodison 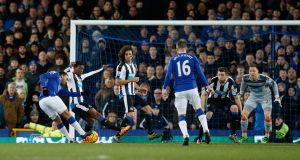 The questions about Mike Ashley’s investment in Newcastle United can be reasonably asked by the owner himself, not his detractors, after deserved defeat at Everton exposed the fault lines running through Steve McClaren’s relegation-threatened team.

Almost €105 million has been spent on new talent at St James’ Park this season but only €11 million has gone on a defence that was dissected by Roberto Martinez’s team as Everton recorded their first home league win since November.

Two late penalties from Ross Barkley, the second a Panenka down the middle of Rob Elliot’s goal after Jamaal Lascelles was sent off for denying the irrepressible midfielder a clear goalscoring opportunity, added gloss to the scoreline but the merits of Everton’s victory were undeniable.

Martinez’s team have leaked goals at Goodison this season but that weakness was never tested as Newcastle’s paucity at the back was matched by their meekness up front.

The team with the worst defensive home record in the Premier League welcomed the side with the fewest goals on their travels, a reassuring statistic for Martinez and one McClaren has sought to remedy via the January transfer market.

Andros Townsend made his full Newcastle debut having played only 64 minutes in the Premier League for Tottenham this season while Seydou Doumbia, the striker signed on loan from Roma, began on the bench having received his work permit on the day of the game. Townsend’s pace provided a valuable outlet for Newcastle on the left wing but it was the home side that made the more assured start.

The first half was a flat, cagey affair but Everton at least showed ambition in the final third. It might have opened up had Newcastle fallen behind at the first sign of pressure, when Barkley and Romelu Lukaku set up Tom Cleverley for a shot from the edge of the area but Elliot saved well low to his left and the visitors continued to sit deep. Barkley was making his 100th league appearance for his boyhood club but Everton’s most inventive spark frequently came into his own half to take possession, such was the lack of space behind Newcastle’s central midfield.

McClaren’s full backs were more accommodating on that score, however, and were badly exposed when the home side went ahead midway through the first half. Bryan Oviedo, deputising for Leighton Baines at left back, was allowed far too much time and space to release the unmarked Cleverley between Daryl Janmaat and Chancel Mbemba. The England international, who delivered Everton’s last league win, with a stoppage-time header at St James’ Park on St Stephen’s Day, squared for Aaron Lennon and his shot on the turn rolled through Georginio Wijnaldum’s legs to leave Elliot rooted to the spot.

Lennon almost scored his third goal in two games from a similar spot before half-time but his goal-bound effort from Seamus Coleman’s cutback was blocked by Mbemba, who exited moments later with an injury.

Lukaku also went close with a 25-yard free-kick, though his movement was restricted after an early blow to the lower back from Mbemba and Barkley missed with an ambitious lob over Elliot after the goalkeeper had sprinted out of his area to head clear a Ramiro Funes Mori cross destined for Everton’s centre forward. Newcastle’s attacking threat was nonexistent in the first half.

Joel Robles started in goal in place of the injured Tim Howard while John Stones was omitted from the squad with the polished central defender requiring a break. The changes were barely noticed. The visitors’ threat was epitomised by Paul Dummett who, shaping to send a routine pass from Townsend into the area, fell flat on his face to concede a goal-kick to Everton.

Dummett and the injured Lukaku did not appear for the second half and nor did an immediate improvement in Newcastle’s weaknesses at both ends of the pitch. Their ambition remained minimal, prompting the away support to chant “attack, attack, attack”, while their defence continued to be prised apart with ease by the movement of Lennon and Barkley.

Robles was forced into his first save in the 50th minute when Jonjo Shelvey sent a tame effort from distance into his arms. Everton, by contrast, could have been out of sight by the hour.

Lennon and Arouna Kone, Lukaku’s replacement, both squandered excellent openings after Barkley sent the winger clear through the centre of the visiting defence. Lennon shot straight at Elliot before Kone dawdled over the rebound before slicing wide. The home side then struck the woodwork three times in six minutes.

Barkley’s attempt to find the top corner was tipped superbly on to the bar by the Newcastle goalkeeper, who found the same spot when Shelvey almost headed Cleverley’s free-kick into his own net. Elliot’s third stop came from another Cleverley free-kick that struck his near post.

The longer Everton went without making the game safe, the more apprehensive Goodison became. Newcastle should have capitalised when the substitute Aleksandar Mitrovic met Moussa Sissoko’s left-wing cross with a side-foot volley but, eight yards out in front of goal, he missed the target badly. The mass of Newcastle heads in hands reinforced the sense of opportunity lost, and so it proved when substitute Rolando Aarons needlessly felled Lennon inside the area with minutes remaining. Barkley made no mistake with the penalty and Everton could breathe easily on home soil at last.