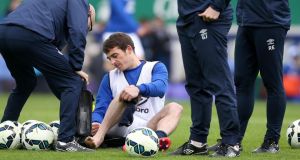 Leighton Baines will be out until pre-season after undergoing ankle surgery. Photograph: PA

Everton defender Leighton Baines has had surgery on an established ankle problem in a bid to ensure he is pain-free for the first time in three years.

The 30-year-old left-back had an operation on Wednesday and will miss the Toffees’ last two matches of the season plus England’s friendly against the Republic of Ireland and the Euro 2016 qualifier in Slovenia next month.

Baines was forced off with the problem in the second half of last weekend’s defeat at home to Sunderland and that forced Everton’s medical team to have a proper look at the injury.

“Leighton had a little bit of instability in his ankle and in the last two weeks it flared up and against Sunderland the pain he was having was intolerable,” said manager Roberto Martinez.

“We got it checked and it needed a little bit of repair work so he had the surgery yesterday.

“It was a straightforward operation just to clear the ankle so he will be out now until the start of pre-season but it is exactly what he needed.”

Martinez said Baines had been managing the problem for a few years but it had been exacerbated in recent weeks.

With nothing to play for in the remainder of the season the club decided to take action to rectify the issue.

“He was trying to play through the pain barrier,” added the manager.

“It has been a problem since 2012 and the ankle has been showing signs in the last two weeks that it needed some work.

“Leading up to the Manchester United game (on April 26) was the first time he had it in an acute state and it was difficult for him to play pain-free.

“It is one of those situations that doesn’t affect you for a period and then you get a knock or a bad movement and it flares up and becomes really painful.

“The specialist saw him yesterday and everything was very quick.

“The work that has been done gives really good stability to a problem he has had for a long time and at the start of the next campaign I feel we will get the real benefit.”

Baines’ absence for Everton’s remaining two matches, plus a broken metatarsal injury to Bryan Oviedo, means youngster Luke Garbutt may get his chance at left-back.

The 21-year-old is out of contract at the end of the season and has yet to agree terms on a new deal despite Martinez insisting they want to keep him.

“From our point of view it doesn’t change anything; we have put a lot of effort on Luke Garbutt’s development in the last two years and we want him to stay at the club,” said the Toffees boss.

“It is his decision (which) is the most important decision out of the two parties.

“But we are very strong in that department. Leighton Baines has been incredible for us in that role, we have Bryan Oviedo who is another full international and Luke Garbutt represents an academy product who is ready to perform.”

However, Martinez refused to confirm whether he would play Garbutt in the final two matches of the Barclays Premier League season.

He added: “We can use this opportunity to look forward to the future but it is too early to tell at the moment (whether he will play against West Ham and then Tottenham).”