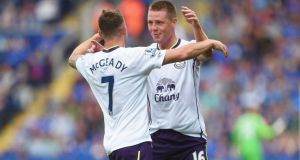 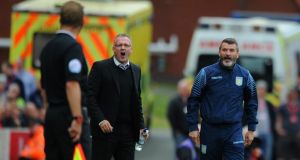 Substitute Chris Wood gave Leicester something to celebrate on their return to the top-flight as his 86th minute effort sealed a 2-2 draw with Everton.

Ireland’s Aiden McGeady curled the visitors in front on 20 minutes only for Leonardo Ulloa, the Foxes’ recent capture from Brighton, to equalise almost immediately.

Steven Naismith slammed Everton back in front on the stroke of half-time but Wood was on hand to hit the leveller past Tim Howard after impressive work from Riyad Mahrez.

Weimann’s 50th minute drive sealed a 1-0 win over Stoke at the Britannia Stadium.

Villa were on top for long periods of the game and could have increased their winning margin with chances for Charles N’Zogbia and Leandro Bacuna.

The visitors were reduced to 10 men in the 29th minute when Kyle Naughton was sent off for handling a Kevin Nolan shot in the box, but Mark Noble fired the resulting penalty wide.

The Hammers were also reduced to 10 men in the 63rd minute when James Collins was issued his second yellow card, and things got worse for the hosts as Harry Kane sent Dier clear to snatch the winner in added time.

Alan Irvine looked set for a debut win in charge of West Brom before a late strike from Sebastian Larsson salvaged a point for Sunderland in a feisty 2-2 draw.

Lee Cattermole’s thunderous early opener was cancelled out by a Saido Berahino penalty and the Baggies striker put his side in front with a close-range volley in the 74th minute.

But Gus Poyet’s men refused to accept defeat and grabbed a point when the impressive Patrick van Aanholt crossed from the left and set up Larsson to stroke home the equaliser.

Hull goalkeeper Allan McGregor saved a late Charlie Austin penalty as the Tigers hung on for a 1-0 win at QPR.

James Chester put the visitors in front with a diving header in the 52nd minute but his 83rd handball gave the home side their spot-kick chance, only for Austin to see his weak kick well saved.