Defoe strikes at the death as Sunderland stun Liverpool 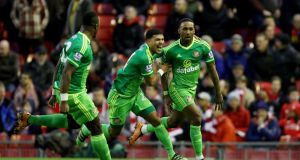 Jermain Defoe scored in the 89th minute to give Sunderland a 2-2 draw at Anfield. Photograph: PA

Second-half goals from Roberto Firmino and Adam Lallana appeared to have put the home side in full control with 20 minutes remaining.

But the way they defended after that would have had Klopp, who missed the game with a suspected appendicitis, turning in his sick bed.

Substitute Adam Johnson’s free-kick somehow beat Simon Mignolet at his near post before Defoe equalised at the death.

The result may have come as a surprise to the few thousand Liverpool fans who staged the first walkout in Anfield’s 132-year history.

It came in the 77th minute, in protest at rising ticket prices next season, and with their side apparently heading for a straightforward victory.

However, seasoned Liverpool watchers will know it is rarely straightforward with this team, especially considering their defensive record, and Sunderland snatched a point which barely seemed possible with 10 minutes to go.

Klopp’s number two Zeljko Buvac was put in charge, although the Serbian was hardly visible in the technical area never mind being as animated as his boss.

The home team, who surprisingly included Daniel Sturridge on the bench for his first appearance in the squad in two months, although he did not get on, were even less animated in the first half against a Sunderland side which lined up 4-5-1 with centre-back Jan Kirchhoff deployed as a stopper in central midfield.

Despite pushing on both full-backs, Liverpool struggled to find a way through the visitors’ massed ranks, although their fluency was not helped by yet more hamstring injuries to defender Dejan Lovren and Joe Allen, on his first Premier League start for two months.

Sunderland were so happy to let their opponents have the ball Liverpool enjoyed an incredible 82 per cent possession in the opening 45 minutes but managed just one shot on target.

Left-back Alberto Moreno forced Vito Mannone into that save after being played in by Lallana, with the defender also managing to balloon over a stooping header from close range on the stroke of half-time.

Liverpool upped the tempo after the break with Firmino suddenly sparking into life, producing one nutmeg and shot just wide, before making the crucial breakthrough when he headed home Milner’s far-post cross in the 59th minute.

The Brazilian then provided a simple pass for Lallana, who had just seen his shot saved by Mannone’s legs, to score the second in the 70th minute.

Patrick van Aanholt should have made things more anxious for the hosts but fired into the side-netting with the goal at his mercy, however Liverpool’s job was made more challenging when Mignolet was beaten at his near post by Johnson’s 82nd-minute free-kick.

Worse was to follow as Defoe turned Mamadou Sakho to equalise and leave those remaining inside Anfield with something else to complain about.

1 America at Large: On Long Island, longing for a return to our field of dreams
2 ‘For 25 minutes I ran out of oxygen’: Pepe Reina on his coronavirus battle
3 Australian rugby staring into abyss as another crisis hits
4 Gordon Elliott backs decision to end jumps season but rues lost opportunities
5 Gerry Thornley: Changes to tackle laws could transform rugby by time of next World Cup
Real news has value SUBSCRIBE