Supporters protest against owners during Seasider’s final fixture against Huddersfield 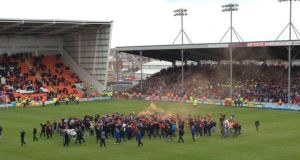 Blackpool’s games against Huddersfield was abandoned after fans invded the pitch in protest against owner Karl Oyston. Photograph: Twitter

Angry Blackpool fans invaded the pitch in protest against the club’s Oyston family owners which caused their final Championship game of the season against Huddersfield to be abandoned after 48 minutes.

The already-relegated Seasiders have suffered a miserable campaign and went into the game hoping to avoid setting a new record low points total.

Stockport hold the dubious honour for fewest second-tier points since the 1988 expansion to 24 sides, with 26 in 2002, but matters off the pitch dominated proceedings at Bloomfield Road.

The protesters had reportedly planned to meet at the statue of ex-player Stan Mortensen — on the 62nd anniversary of his FA Cup final hat-trick of 1953 — but the club had temporarily removed it.

But Blackpool supporters still remonstrated outside the stadium before kick-off, with chants continuing throughout the match.

That ill-feeling boiled over in the 48th minute when hundreds of home fans took to the pitch and unveiled banners against chairman Karl Oyston and owner Owen Oyston’s running of the club.

Some flares were released and the scene soon became farcical as some fans began a conga in the centre of the pitch.

It resulted in over an hour delay before referee Mick Russell abandoned the game with the scores level at 0-0.

A Football League spokesman said: “Following the abandonment of today’s match at Bloomfield Road, it will be for the Football Association to consider any matters relating to crowd behaviour with the Football League ruling on whether or not the match should be replayed.”

On the pitch, Huddersfield dominated and created an opening inside the first minute but James Vaughan skewed his shot from Tommy Smith’s right-wing cross.

And they continued to push forward, forcing Ell Parish to make a fine double save on 20 minutes. The Blackpool keeper first denied Joe Lolley one-on one before flinging himself at the feet of Ishmael Miller from 12 yards out.

From the resulting corner, Joel Lynch was inches wide with a header from 12 yards.

The one-way traffic continued and former Blackpool striker Miller almost grabbed the opener after 32 minutes, but his left-footed strike from 20 yards brushed the roof of the net on its way over.

Blackpool — who have not won any of their last 17 games — almost scored with a Peter Clarke strike from 30 yards, but Alex Smithies tipped the former Huddersfield captain’s header around the post as the first half drew to a close.

Ex-Huddersfield boss Lee Clark’s bottom-of-the table side, burst out the traps in the second half and Jamie O’Hara’s deflected strike in the opening minute was superbly pushed away by Smithies.

But the mounting frustration inside Bloomfield Road came to a head on 48 minutes when Blackpool fans stormed onto the pitch and brought a premature end to the game.

1 Ireland suffer Twickenham torture yet again as England dominate
2 England 24 Ireland 12: How the Irish players rated at Twickenham
3 TV View: Sunday Bloody Sunday . . . Not Bono’s fault but Boy, that was Bad
4 England held all the aces in defining battle of the breakdown
5 Waterford survive rising Galway tide to make it three from three
Real news has value SUBSCRIBE