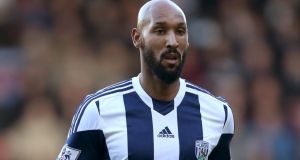 Nicolas Anelka has also been suspended by his club West Brom after the Football Association found him guilty of an “aggravated breach” of anti-discrimination rules. Photograph: PA

Nicolas Anelka may have played his final game after being banned for five matches for performing the controversial ‘quenelle’ gesture.

The veteran French striker has also been suspended by his club West Brom after the Football Association found him guilty of an “aggravated breach” of anti-discrimination rules. The five-match ban will now be put on hold for seven days to allow Anelka and West Brom to receive written reasons for the verdict of an independent regulatory commission.

From then Anelka will have another seven days to decide whether to lodge an appeal. Should he do so, the punishment will remain in abeyance until the final outcome.

With West Brom only having 11 games left this season, and having said Anelka will remain suspended until the conclusion of proceedings, it remains to be seen whether a player who has previously hinted at retirement plays again.

Anelka faced two charges – that the gesture he performed during a goal celebration on December 28th was abusive, indecent, insulting or improper, and that it included a reference to ethnic origin, race, religion or belief.

Both charges were proved but the commission did accept that Anelka was not aware of the anti-Semitic connotations of the ‘quenelle’.

The Frenchman had argued it was anti-establishment, and he did it in support of his friend Dieudonne M’bala M’bala, the comedian who first brought the ‘quenelle’ to prominence.

The five-match ban is the minimum that can be imposed for such an offence. Anelka was also fined £80,000 and ordered to attend an education course.

A statement from the club read: “West Bromwich Albion treats very seriously any such allegation which includes any reference to ethnic origin and/or race and/or religion and/or belief.

“Upon both charges being proven, the club has suspended Nicolas Anelka pending the conclusion of the FA’s disciplinary process and the club’s own internal investigation.

“The club acknowledges that the FA panel ‘did not find that Nicolas Anelka is an anti-Semite or that he intended to express or promote anti-Semitism by his use of the quenelle’.

“However, the club cannot ignore the offence that his actions have caused, particularly to the Jewish community, nor the potential damage to the club’s reputation.”

West Brom have suffered negative press over the affair with property company Zoopla announcing last month they would not be renewing their sponsorship deal. The company’s co-owner, Alex Chesterman, is Jewish.

The verdict was welcomed by anti-racism groups but for some observers it did not go far enough.

Stephen Pollard, editor of The Jewish Chronicle, told Sky Sports News: “The whole thing is ludicrous, they’ve given him the minimum ban possible, which is five matches, and I think it brings the FA into considerable disrepute in the fight against racism.

“It’s not even close to being punishment enough, it’s the minimum punishment possible under the FA’s rule, and the ruling is wrong.”

A statement from Anelka’s legal advisers, Brown Rudnick LLP, read: “Nicolas Anelka is pleased that the FA regulatory commission has found him not to be an anti-Semite and that he did not intend to express or promote anti-Semitism by his use of the quenelle gesture.

“He is now waiting to receive the commission’s full reasons for their decision before considering whether or not to appeal. Nicolas Anelka has been advised not to make any further comment while the proceedings are ongoing.”