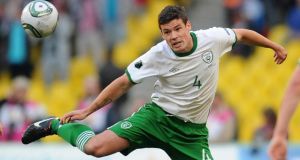 Republic of Ireland defender Darren O’Dea has agreed a three-year deal with Ukrainian side Metallurg Donetsk.

The former Celtic and Leeds United player is currently in Ukraine and hopes to debut against FC Karpaty Lviv at the weekend.

“It’s a three-year-deal,” said his agent Kevin Moran from Donetsk this evening. “He signed it yesterday and all going well he will play on Saturday.”

O’Dea had been playing with and captaining Toronto FC but appeared to be forced out the door this week in a cost-cutting measure.

He was the highest paid defender below the Major League Soccer salary cap, on around €349,000 per annum, and chose Canada last year over a more lucrative offer from Ukrainian side Tavriya Simferopol, because he thought it would be easier for his family – wife Melissa and daughter Lucia (2) – to settle in Toronto.

However, the contract he received then was not the “smartest idea”, according to Toronto manager Ryan Nelsen, and the club have succeeded in offloading the 26-year-old after he rejected a revised offer.

Nelsen said O’Dea “wanted to go”, but the player was less than enthusiastic on Twitter last Sunday: “For everyone asking, I’m discussing terms with another team. Not what I want! Not got a choice! I’ll update you when things are clearer!”

In sporting terms, at least, the move is a positive one. The defender could find himself playing in the Europa League this year and will watch with interest tomorrow when Metallurg enter the draw for the third qualifying round.

Second-tier champions in 1997, they finished fifth in their well-respected domestic Premier League last season, but kicked off the new campaign with a 1-0 defeat to Metalist Kharkiv on Monday night.

Should O’Dea settle in the industrial city founded in 1869 by Welsh businessman and mining magnate John Hughes, his stock with Ireland manager Giovanni Trapattoni will almost certainly rise and could pave the way for him to add to his relatively modest haul of 19 caps.

His debut, should it come on Saturday, will be at Metallurg Stadium, which has a capacity of just 5,094. The club is in the process of building a new 17,500-capacity ground in the nearby city of Makiivka but will play their European games this season at the Donbass Arena, the home of their powerful local rivals Shakhtar Donetsk.