Creevy double has Bohemians in clover 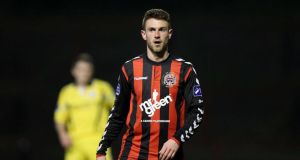 Two goals in the space of six second-half minutes by Robbie Creevy eased Bohemians into the third round.

Bohemians dominated the majority of the opening period at Dalymount Park.

This was a let-off for Leinster Senior League side, and although captain David Vickery was offering plenty of protection for the Firhouse back four, their resistance was eventually broken prior to the half-hour mark.

An initial strike by Byrne crashed off the crossbar, but the veteran centre-forward fired past Firhouse goalkeeper Brian O’Reilly from the rebound.

This provided Bohemians with a strong platform, but after Dean Delany was finally forced into action by Anthony O’Rourke and Peter O’Donnell, Firhouse received a boost with just three minutes remaining in the half.

First-round hero Carl Wynne was hauled down inside the area by centre-half Stephen Best, and from the resulting spot-kick, Luke Synnott scored.

This strong response by Firhouse raised the possibility of a major upset, and the pacey Harmony Mercer was posing problems for the Bohemians defence.

Bohemians were eager to regain the ascendancy, however, and nine minutes after the restart, they restored their one-goal lead.

Brilliant link-up play between Robbie Creevy and O’Brien opened up space for the former to unleash an unstoppable shot into the bottom corner of the Firhouse goal.

Creevy doubled his account on the hour mark when he poked home a pinpoint Roberto Lopes cross from the right flank.

Firhouse were left with a mountain to climb, and despite winning several free-kicks inside the Bohemians half, they couldn’t register a badly-needed second goal.

In fact, it was Bohemians who were creating the clear-cut opportunities during the final-quarter, and on the stroke of 80 minutes, the alert Kealan Dillon finished off a goalmouth scramble to complete an impressive second-half showing from the top-flight side.