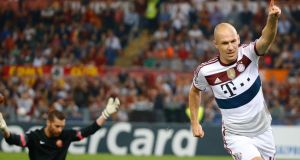 A ruthless Bayern Munich scored five goals in the first 35 minutes on their way to an astonishing 7-1 Champions League win at AS Roma on Tuesday that left the home players and supporters shell-shocked.

Arjen Robben scored twice, while Mario Götze, Robert Lewandowski and Thomas Müller, from a penalty, also chipped in before halftime as the Bavarians exploited the many gaps left by the Roma defence in the Group E match.

Gervinho pulled one back for Roma after halftime only for further goals from substitute Franck Ribery and Xherdan Shaqiri to give Bayern their biggest ever away win in Europe, while Roma equalled their heaviest ever defeat.

It was Bayern’s 12th match without defeat in all competitions and left them top of the group with nine points from three games, five clear of Roma. Manchester City have two points and CSKA Moscow one.

Robben opened the floodgates in the ninth minute when he collected the ball on the edge of the area, jinked inside Ashley Cole and effortlessly curled his shot past Morgan De Sanctis.

Bayern goalkeeper Manuel Neuer stopped Gervinho’s shot two minutes later, preventing a goal that could have dramatically changed the course of the game, and from then on it was all Bayern.

Götze exchanged passes with Mueller and wrong-footed De Sanctis from the edge of the area in the 23rd minute, then Lewandowksi, unmarked, headed in Juan Bernat’s cross two minutes later with Roma coach Rudi Garcia in an apparent state of shock on the bench.

The goals kept coming as Robben got in behind Cole to fire the fourth on the half-hour and Müller converted a penalty after a handball by Kostas Manolas five minutes later.

Roma were less submissive after halftime, and Gervinho, having hit the post and been denied again by Neuer, finally pulled one back in the 66th minute.

But Bayern were irresistible, and Ribery, having just come on, ran on to Robben’s through ball and chipped De Sanctis before Shaqiri completed the scoring from close range.