Javier Hernandez strikes at the death to send Real through 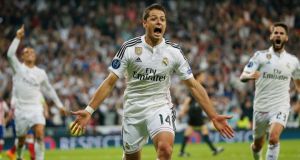 Javier Hernandez’s late goal gave Real Madrid a 1-0 win over Atletico and sent them through to the last four of the Champions League. Photograph: Reuters

Madrid’s derby may have been Atlético’s this season, but Europe still belongs to Real. Atlético were down to 10 men, exhausted, and willing the clock to run down when Cristiano Ronaldo burst up the right and fed Javier Hernández to score the goal that sent the European Champions through to the semi-final. They had finally beaten their city rivals – for the first time since they met in last year’s final. There had been seven derbies since then, but eight was the number.

As Hernández put the ball in the back of the net, the scoreboard said 88 minutes. One goal had been enough and Real had got it. They had looked for it for much of the game but not always looked like getting it. Atlético had hoped to hang on but, after Arda Turan picked up his second yellow card and with all three changes made, penalties seemed their only way through. They didn’t get there. Hernández did. Real had played without four of their usual starting XI and, in the absence of Gareth Bale, Karim Benzema, Luka Modric and Marcelo, it was one of the replacements who sent them through.

“They will be in no hurry to score … and nor will we,” Carlo Ancelotti said. He was half right. Real appeared in more of a hurry. For the first 15 minutes, Atlético barely touched the ball, the home side pushing them back. After 11 minutes, Javier Hernández had the first chance but seemed to be looking for the pass not the shot. When no one called for it, he did eventually go for goal, but smashed the ball into the side-netting. Two minutes after that, another opportunity opened up for Ronaldo on the edge of the area: a better opportunity, in fact, than he appeared to realise. The shot was struck hurriedly and pulled wide.

Few other chances came until the end of the half. It was one thing having the ball, another creating much with it. Isco rarely appeared and while Sergio Ramos might have been comfortable as a deep midfielder, he looked uneasy to the right of Toni Kroos. Dani Carvajal’s overlaps on the right were not replicated on the left in the absence of Marcelo. Hernández was the most likely to make something happen, his movement sharp and intelligent.

What danger there had been, Diego Simeone spotted. He soon shifted his side: Antoine Griezmann dropped into left midfield from his starting position up front and Saúl Ñíguez moved inside with Tiago Mendes and Koke. The balance tilted slightly, but it soon tilted back again, just not so clearly or as far as before. Atlético are a side that do not mind defending anyway and they were more comfortable now, able to keep the ball longer and maintain greater distance between Real and their goal. James Rodríguez curled over at one end, Jesús Gámez shot at the other and Ronaldo’s free-kick was stopped by Jan Oblak, but genuine chances were few.

Then, in the final minute of the half, came a big moment for Ronaldo. A combination of Carvajal and Rodríguez took the ball from Ñíguez and fed the Portuguese inside the area, one on one. The shot was not entirely convincing but Oblak was. Quickly out, he made a decisive stop. From the corner, Raphaël Varane’s header flew just over. When the half-time whistle went, Ramos rose his hands, imploring the Bernabéu to increase the noise.

Simeone’s mind was made. At half-time, he replaced Ñíguez with Gabi but the start of the second period threatened to resemble the start of the first. Isco threaded a clever pass inside for Hernández near the corner of six-yard box. Oblak came towards the striker and Hernández cut his shot, on the turn, beyond the keeper and wide of the far post. Soon after he seemed to be bundled over by João Miranda, but the referee, Felix Brych, ignored the shouts for a penalty.

Again the pressure was Real’s. The need to score was there too, although Ancelotti had said he was prepared for penalties and hinted that he did not mind a 0-0 if needs be. Deliveries into the box yielded corners more often than shots but with Pepe, Ronaldo, Varane and Ramos, corners did at least carry menace. And Atlético, whose European title escaped them when Ramos headed in a 93rd-minute corner in Lisbon, knew that. Varane reached one delivery and not long after Ramos headed Ronaldo’s left-footed cross. Oblak caught both easily enough but in the air Real dominated and with the ball they did too.

Griezmann’s withdrawal on 65 minutes was eloquent. Atlético’s top scorer had been unable to influence the game at all. Real denied him the chance to run off Mario Mandzukic and in Varane he faced a centre-back who is quicker than him anyway. Chances were rare, but increasingly it looked like it might only take one.

And then Real got what appeared a decisive break. Turan lifted his foot to block Ramos’s clearance, studs showing. As Ramos followed through, feet met and the referee reached for the red card. There were 15 minutes of normal time left and Real had a one-man advantage. Atlético looked exhausted. Again, it was Hernández who had the chance to make that advantage count; again, his shot flashed past the far post. Atlético were exhausted; Mandzukic could hardly run and Tiago had to depart, replaced by José Giménez. All the visitors could do was hang on. In the end, they could not.