Tevez relishing his leadership role as he shows up Galacticos 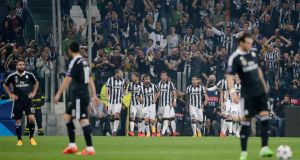 The Italian oversaw a 2-1 loss in Turin as strikes from Alvaro Morata and Carlos Tevez cancelled out the effect of Cristiano Ronaldo’s 76th goal in the competition.

Real must now win the home leg to stand a chance of meeting either Barcelona or Bayern Munich in the Berlin final.

Ancelotti told realmadrid.com: “This result does not fill us with joy but we are confident about turning things around in the Santiago Bernabeu.

“We looked good when we passed the ball around and carved out chances, but Juventus are dangerous on the break.

“We could have played better. Throughout the game we tried to play efficiently and with quality. We wanted to control the match but were unlucky with the counter-attack that made it 2-1.

“A 1-1 would have been a good result. We played an attacking game, but it became difficult to find space and Juve were extremely dangerous on the break.

“They are in great form at the moment. Last season we played them in the group stage while this year it’s a two-legged semi-final.

“They are a very well organised team at the back. It is difficult to find a way of breaking them down — it requires patience.”

Defender Sergio Ramos, who played in midfield on Tuesday night, added: “It’s by no means a good result, but we have the bonus of playing the second leg at home to help us improve things that didn’t go well here.

“We’re one step from the final and we’re going to give it our all at the Bernabeu.

“What would be disappointing would be going out. After a bad result you have to stay calm and more united than ever.”

Ronaldo made history in the 27th minute at the Juventus Stadium as he converted James Rodriguez’s cross to move one goal ahead of Lionel Messi in the all-time scoring charts.

The Portuguese has brought up 76 goals in just 114 games — 62 as a Real player and 52 with Manchester United, scoring nine times this season to match Shakhtar Donetsk’s Luiz Adriano as top-scorer.

Juventus spent about €12 million to sign Carlos Tevez, a fraction of what Real Madrid paid for Gareth Bale and Ronaldo, yet it was the Argentine who called the shots in their Champions League clash on Tuesday.

Having missed out on last year’s World Cup in Brazil, Tevez has since been recalled by Sabella’s successor Gerardo Martino.

Tevez reiterated after the match that he felt valued by his team mates and coach Allegri.

“My team mates have shown to me that I’m a leader and I try to do the best I can,” he told television reporters. “I feel important and that helps me play better.”