Narrow win in Dundee keeps Brendan Rodgers’ side out in front 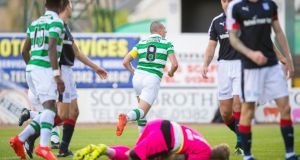 Brendan Rodgers’ side went into the game on the back of an epic 3-3 home draw with Manchester City in the Champions League on Wednesday night and unsurprisingly they dipped below that level on Tayside.

After a goalless first 45 minutes rampaging midfielder Brown broke the deadlock two minutes after the restart when he scored with a close-range drive.

The win keeps Celtic clear at the top of the table while Dundee, for all their effort, continue to struggle, having not won in the league since the opening day of the season.

Looking to amend that poor run of form, Dark Blues boss Paul Hartley made four changes with Danny Williams, Cammy Kerr, Kevin Gomis and Yordi Teijsse coming into the side.

After a minute’s applause in tribute to former Dundee player Alan Cousin who passed away recently aged 78 after a short illness, Celtic started with purpose.

Dens Park keeper Scott Bain keeper made his first save of the afternoon from Hoops forward Scott Sinclair in the eighth minute when threw himself to his left to push curling shot from 20 yards past the post, before clutching Tom Rogic’s corner with confidence.

There followed a penalty appeal when Dundee full-back Kerr, booked earlier for a foul on Rogic, tackled Hoops centre-back Erik Sviatchenko in the home side’s penalty area but referee Andrew Dallas was unimpressed.

The visitors’ grip on the game was firm.

Bain pulled a 25-yard free-kick from Rogic out of the air at his top left-hand corner in the 22nd minute and then made a good save at point-blank range from Sinclair, although Dallas blew for offside.

Three minutes from the break, in a rare Dundee foray, Fassal El Bakhtaoui’s cross was headed over at the near post by Teijsse but in added time Bain thwarted Sinclair again before Parkhead striker Moussa Dembele lofted the ball over.

It was Brown who showed how it should be done just after the break when, after getting the ball after initially setting up Dembele in the box, he curled the ball with his left foot into the far corner.

Celtic kept pushing for a second and in the 68th minute Sinclair had another effort, this time a low drive saved by Bain.

Leigh Griffiths and Patrick Roberts had come on for Rogic and aames Forrest respectively, adding fresh legs to a Celtic side looking fatigued, but while the second goal did not arrive, Dundee failed to test Gordon at the other end.