Celtic see off St Johnstone to restore lead at the top 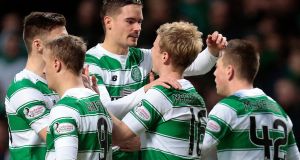 Gary Mackay-Steven scored his first two goals of the season as Celtic restored their six-point lead in the Ladbrokes Premiership with a 3-1 victory over St Johnstone at Parkhead.

Stuart Armstrong was also on target, regaining the lead for Celtic after Steven MacLean had fired an immediate response to the ninth-minute opener.

Leigh Griffiths was strangely wasteful with his shooting after hitting seven goals in three games but he played a key part as Celtic scored with their first decent attack.

The striker turned away from Steven Anderson on the edge of the box and his blocked shot fell into the path of Mackay-Steven, who took a touch and drilled home from 12 yards.

Alan Mannus soon saved from Armstrong but Saints were level in the 12th minute after some good wing play from Michael O’Halloran, who was restored to the team after Rangers failed to follow up their two unsuccessful bids.

O’Halloran forced his way to the byline, cut the ball inside where MacLean was waiting at the near post to finish from close range.

Mannus stopped Nir Bitton’s long-range effort but Celtic were slow to respond to the equaliser and MacLean latched on to a long ball but Craig Gordon got down to make a comfortable save.

Celtic stepped up a gear and Kieran Tierney’s low cross found Mackay-Steven in space 16 yards out but he could not keep his shot down.

Mikael Lustig’s low cross was then just too far in front of Griffiths and Celtic were guilty of taking one pass too many on a number of attacks until Callum McGregor curled in a shot from 18 yards. Mannus palmed it away but Celtic maintained the pressure and Armstrong met Lustig’s cross on the volley and guided the ball high into the corner of the net with two minutes left of the half.

Griffiths blasted over from 10 yards after Mackay-Steven’s powerful strike was parried but the winger was soon on target again in the 55th minute. He collected Stefan Johansen’s disguised pass just inside the box and slotted home, although Saints boss Tommy Wright claimed the Norwegian midfielder had handled before making the assist.

Mannus saved from Armstrong and Griffiths but Saints almost got back into it when Gordon punched a corner off a team-mate, Johansen clearing off the line.

Gordon then made a brilliant point-blank save from Liam Craig after O’Halloran’s low cross found the substitute unmarked eight yards out.

Ryan Christie was given a late debut as Celtic saw out a win which restores their lead over Aberdeen ahead of their trip to Pittodrie on February 3th.

Anthony Stokes marked his Hibernian return with a goal in a 3-1 victory over St Mirren at Easter Road in the Scottish Championship.

Hibs took the lead in the 10th minute when on-loan Celtic midfielder Liam Henderson curled a 25-yard free-kick into the top corner.

They doubled their advantage a minute before the break, John McGinn slotting into the bottom corner past keeper Jamie Langfield.

Saints reduced the deficit in first-half injury time as Stephen Mallan bent a free-kick into the bottom corner from 20 yards.

Paul Hanlon and McGinn had efforts cleared off the line before substitute Stokes, signed on loan from Celtic this week, wrapped up the points in the final minute with a close-range strike.