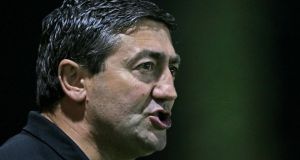 he expects English Championship side Brentford to make a firm offer for Michael Duffy over the coming days after the midfielder and Patrick McEleney had trials with the club.

“The word back was that they were impressed with both of them but I think they’ll push ahead with Michael pretty quickly,” said Hutton yesterday. “I expect that talks between the two clubs will open up over the next few days.”

Hutton hasn’t ruled out the idea that Celtic might come back in for Duffy despite the fact that the 20 year-old declined a request to go back to Scotland for a third time in recent weeks. “I really don’t see what that will achieve,” the player told the Derry Journal this week3. “The Celtic manager watched me training and with the (training) game against Newcastle having been recorded, I don’t see why he would want me over again.

Hutton, however, says that he believes the Scots are weighing up their options and may yet come back in for Duffy who has impressed for City in the League here.

Liam Buckley, meanwhile, insists that St Patrick’s have yet to receive a firm offer for centre-half Seán Hoare despite interest from “a number of clubs”. Hoare had widely been expected to join Hull after what was believed to be a successful trial there and the Dubliners are believed to value the 20 year-old at around €250,000.

Martin O’Neill will skip the glamour of the cup in order to check in on Darren O’Dea’s form for Blackpool this afternoon with the Championship side taking on sixth place Watford in the league.

Should fans be allowed drink in the stand at sporting events?
Here is your handy guide to sport on television this week

1 Gordon D’Arcy: Digging deep only recipe for Twickenham success
2 Ireland to stick with winning formula against England
3 Mourinho expects Son to miss rest of the season
4 Munster awaiting details of latest medical update on Joey Carbery
5 Robbie Henshaw and Bundee Aki to lead from the centre
Real news has value SUBSCRIBE
Crossword Get access to over 6,000 interactive crosswords