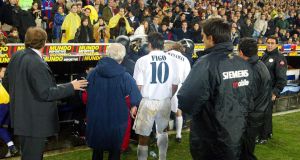 Luis Figo has been prevented from playing for the Barcelona legend’s team. Photo: Firo Foto/Getty Images

Luis Figo’s decision to quit the Nou Camp for the Bernabéu fifteen years ago has not been forgotten, and certainly not forgiven by Barcelona.

The Catalan club have made a special request to Uefa to prevent the Portuguese player from representing their “legends” in the Juventus/Barcelona Legends team who play against a World All-Stars XI in the Ultimate Champions Match on Friday in Berlin.

Figo left Barcelona in 2000 after five seasons and two La Liga titles, to join Real Madrid for a then World record fee.

He would go on to win two more La Liga titles and a Champions League in 2002, but upon his return trips to the Catalan capital he was targetted by furious fans who branded him a traitor. Among the barrage of missiles and beer bottles thrown on to the pitch upon his infamous return in 2002 a pig’s head also found its way onto the pitch.

The club notified their fans of the decison on social media;

“As Uefa informs us, by request of our Club, Luis Figo will not represent Barça in the Legends match in Berlin.”

1 Owens’s comments increase tensions ahead of FAI senior council meeting
2 Stirling and Balbirnie tee off to tee up another famous Ireland win over England
3 Sporting Controversies: The brutal, sad and mysterious tale of Shergar
Real news has value SUBSCRIBE
Crossword Get access to over 6,000 interactive crosswords