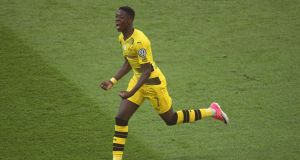 Barcelona have signed French midfielder Ousmane Dembele from Borussia for and initial €105 million, which could rise to €147 million. Photograph: Odd Andersen/AFP/Getty Images

Ousmane Dembele has joined Barcelona from Borussia Dortmund on a five-year contract, the LaLiga club have announced. The Catalan giants signed the highly-rated France international for €105 million – the second highest transfer fee of all time behind Neymar, who switched Barca for Paris St Germain earlier this summer for €114 million.

Barcelona said in a statement on their official website: “FC Barcelona and Borussia Dortmund have reached an agreement for the transfer of Ousmane Dembele for €105 million plus add-ons. The player will sign a five year contract and his buy out-clause is set at €400 million euros.”

Dortmund revealed Dembele’s fee could rise to €147 million with a possible €42 million due in additional bonus payments.

The German club said on their official website: “The payment of add-ons was agreed up to a maximum total amount of approximately 40 per cent of the fixed transfer fee.”

The 20-year-old is due to arrive in Barcelona on Sunday and will undergo a medical on Monday morning.

Since Neymar’s departure, Barca have been linked with several big-money signings and Dembele has always been near the top of their shopping list, along with Liverpool’s Brazilian playmaker Philippe Coutinho.

This move could mean Barca’s interest in Coutinho may cool in this transfer window.

At the same time as Barca’s reported interest in Dembele came to light, the player skipped training with Dortmund and was subsequently suspended by the Bundesliga side.

Dortmund then revealed they had rejected an offer from Barca for their young forward – who was under contract until 2021 – because “it did not correspond to the extraordinary footballing and additional value of the player and the present economic situation of the European transfer market”.

However, the two clubs have now reached an agreement that will see the Frenchman move to the five-time European champions.

Dembele joined Dortmund in May 2016 from Rennes on a five-year contract and has attracted top European suitors after a breakout season at the Westfalenstadion.

He scored 10 times in 49 appearances in all competitions during the last campaign, while he broke his duck for France with the winner in the 3-2 friendly triumph over England in June.