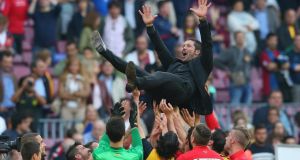 Atletico Madrid coach Diego Simeone is thrown in the air by his players after winning the La Liga title after their 1-1 draw against Barcelona at the Nou Camp. Photograph: Alex Livesey/Getty Images

Barcelona 1 Atletico Madrid 1: A towering Diego Godin header secured Atletico Madrid the draw they needed against Barcelona at the Nou Camp and a first La Liga title for 18 years in a thrilling climax to the campaign on Saturday.

Barca needed to beat Atletico in a final-day showdown to snatch the title away and Alexis Sanchez gave the hosts hope when he rifled home from an acute angle after 33 minutes.

But four minutes after the break Godin powered home from a corner and Atletico defended robustly to earn the draw they needed and claim their first championship since 1995-96.

“This was something unimaginable at the start of the season but totally deserved,” Atletico captain Gabi told Spanish television as his delirious team-mates celebrated on the pitch behind him.

“We always believed in ourselves, even when we fell behind today,” he added.

“It is a honour to be part of this and to be able to compete with the big clubs.

“Let the fans enjoy this now because they deserve it. We will celebrate this great title now and from Monday we will focus on the Champions League which is the priority now.”

Atletico, who contest next Saturday’s European showpiece against Real Madrid in Lisbon, finished with 90 points, with Barca second on 87 and Real, also with 87, in third.

“We had it within our grasp for 45 minutes but all we can do now is congratulate Atleti,” Barca playmaker Andres Iniesta told Spanish TV.

“After we went ahead their goal really hurt us and they are worthy champions,” added the Spain international.

“We tried to the very end but today we are left empty-handed. This season is over for us and now we just have to move forward.”