Andy Woodward’s harrowing story must be a call to arms 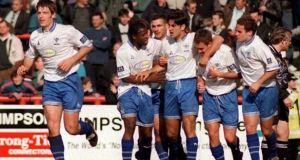 Andy Woodward, middle, celebrates with his Bury team-mates after a goal against Brentford in March 1997. Photograph: Matt Risby/Action Images

In some ways it should not come as a shock, given the horrific stories that have already poured forth from the media, showbusiness and music industries about institutionalised abuse of children in the 1970s, 1980s and early 1990s. But we may never become inured to the numbing, dizzying dislocation that has been prompted by Andy Woodward’s startlingly brave, disarmingly matter-of-fact account of how his childhood was stolen by a convicted paedophile football coach employed by Crewe Alexandra and several other clubs during the 1980s and 1990s.

To read Woodward’s account is to be reminded that this was likely to have been no isolated case and that there are likely to be more perpetrators and others, possibly many others, who were similarly affected. It is naive to think that football – with its similar cocktail of glamour, ambition, power and opportunity – could not also be a breeding ground for those wanting to prey on boys who would do almost anything to make it as a professional.

Individual heartbreaking cases down the years act as a reminder of the particular risks in sport where young charges are entrusted to coaches with huge power over them for long periods of time. The risk has been perceived as particularly acute in individual sports such as swimming and athletics.

But Woodward, by waiving his anonymity, reminds us that there may yet be another grim chapter, as yet unexamined, in one of English football’s darkest periods. Among the many disturbing things about Woodward’s account is his assertion that Barry Bennell’s reputation was common knowledge around a club with a hard-won and longstanding reputation within the game for youth development, but no questions were asked.

Visit any of the shiny multimillion-pound academies that now proliferate at Premier League clubs and which hoover up hundreds of kids every year from the age of five and six, and it is harder to believe that a paedophile could operate in plain sight at that level. Child protection systems are in place and today’s academies are in some ways more like schools in terms of the environment they offer and the professional structures in place.

The Football Association, in one of the many important jobs it does beneath the visible tip of the iceberg on to which is crammed the FA Cup and the soap opera of the national side, has a child safeguarding unit that oversees a pyramid of paid and voluntary personnel across all affiliated clubs at youth level.

All involved believe it would be harder for a Bennell to operate with such impunity today. But that does not mean it could not happen.

When Bennell’s name first emerged as being linked with child sex offences in a Channel 4 Dispatches in 1997, the FA did not even have a proper screening programme for grassroots football. A glance at the copious material on the FA’s website is testament to how much has changed.

Yet that should not lead to any complacency. If anything, Woodward’s decision to tell his story must be an urgent call to arms. Not only, as he hopes, in giving others similarly affected during that era the courage to come forward. But also in forcing football to look in the mirror and assess whether it is equipped to properly face up to what may have gone on in the past and ensure that it cannot happen again in the future.

That extends to everything from fully backing schemes put in place by the Professional Footballers’ Association, which runs 24-hour helplines for current and former players, to continuing to support Sporting Chance. The clinic founded by Tony Adams and Peter Kay, who died in 2013, has – sadly – never been busier in helping former players tackle a range of demons.

There will be those in football who say it is wrong to turn up too many stones, wrong to cast aspersions too widely. They will point to the balance between the horrors unearthed by Operation Yewtree, on the one hand, and on the other the collapse of Operation Midland, the question marks over which highlight the dangers of a scattergun approach that sprays suspicion in all directions.

But if Woodward’s bravery is not to be in vain, football owes it to all those who might have been affected to provide a mechanism and a framework for them now to come forward and tell their stories, laying the groundwork for any criminal prosecutions that may follow.

There is another eternal lesson for football in all this. Woodward also talks about the omerta that exists within the dressing-room walls and how hard it can be to break beyond that.

“Throughout those years at Crewe, so many people used to talk about it. Other players would say directly to my face: ‘I bet he does this to you, we know he does that.’ There was all that dressing-room bravado. Then, outside the club, it was never discussed,” he said. “That’s how football worked back then: ‘We can talk about it within these walls, but we keep it watertight and it doesn’t go any further.’ Nobody wanted to break that circle of trust.”Whether that was a product of the times – a symptom of the fact that the subject of child abuse could at times be treated with a kind of awkward nonchalance that now seems completely alien – or still persists in football today is a subject for debate.

What is unarguable is that dressing room culture remains a powerful force – often positive, sometimes benign, too often toxic. On all sorts of issues from sexuality to race, the pressure to fit in and not to rock the boat can be overwhelming.

None of this should spark a moral panic. But given the disparate, patchwork nature of the thousands of sports clubs strung across the country it should act as a reminder, if it was needed, of the responsibility on all of us – from governing bodies to coaches, parents to schools – to ensure eternal vigilance and that the necessary safeguards are in place.

Woodward’s account should also focus attention on an era when too few of those controls were in place and during which we can now see the game failed to look after some of its most vulnerable. It must now, surely, make amends.