Sky the limit for sizzling sliotars but how about some info for GAA newcomers? 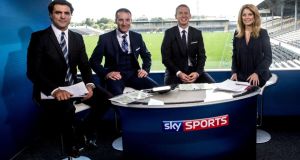 Presenters Brian Carney and Rachel Wyse with hurling analysts Jamesie O’Connor and Ollie Canning ahead of the the first ever Sky Sports GAA broadcast between Kilkenny and Offaly at Nolan Park on Saturday. Photograph: Inpho/James Crombie

The Big Day was upon us, Gaelic Games’ debut on Sky.

It being Sky you’d have anticipated a spectacular opening, perhaps Rachel Wyse and Brian Carney arriving in Nowlan Park in a green, white and gold rocket ship, with a pyrotechnic display and a Riverdancing cheerleader or two; Jamesie O’Connor and Ollie Canning parachuting in to one parallelogram, Mike Finnerty and Nicky English in to the other, before the pitch opened up to unveil a giant glowing golden sliotar ascending towards the heavens. With Eye of the Tiger blasting from the speakers.

And then a windswept Rachel and Brian emerged from a Nowlan Park goal to welcome us, Brian having a word with his British viewers: “We hope you’ll soon discover, this is more than just sport: it’s a way of life.”

We, of course, knew that already, but it reminded us that this was a bit like RTÉ having exclusive coverage of a Royal wedding and all of Britain tuning in to watch.

Britain: “Is this fella for real?!”

Anyway, more Sky-ish was the little film shown next, of a small boy dreaming of playing on the big stage (Sky love their kiddies in these promos, heart strings tugged to snapping point), intermingled with epic moments and sparks and flames emanating from hurleys and sliotars. Much more like it.

Then we saw Kilkenny and Offaly fans arriving at Nowlan Park in slow motion, which is very Sky-ish too, although, to be honest, it works better when you don’t see a slow motion wobbling beer belly bedecked with an Offaly shirt with ‘Carrolls – Quality Irish Ham’ emblazoned on it.

No matter, on to the studio, where Brian was initially positioned between Rachel and Ollie, but then – and this was puzzling – moved to a spot between Ollie and Jamesie, like the fella couldn’t keep still.

By now you wanted the red button to offer you a ‘Where will Brian sit next?’ option.

All very polished and slick, Jamesie O’Carragher not shy about offering a hearty opinion or two, and super comfy with the touch screen thingie, his kidnapping of which must have left Gary O’Neville wondering what to do with his fingers on Saturday.

Tap, tap, flick, slide, and Eoin Larkin went from left wing-forward to right corner-back, which would have left the fella dizzy and perhaps having a word with Brian Cody about where he would be best deployed. And a big squiggle around Colin Fennelly, like he was trapped in a bubble, but there was no stopping Jamesie, the touch screen thingie is his new best friend.

Match time. Jamesie and Nicky reckoned Offaly could put it up to Kilkenny. They did too, in the opening minute.

But, if Sky were feeling peeved about the lopsy- sidedness of it all, think on this: there were 56 scores in the game, as opposed to none in the clash of England and Ecuador in Miami, so.

“Just watched 5 mins of Hurling, WTF is going on there’s a GK but they keep smashing it over the bar how the **** does he save that.”

A fair question, so Rachel and Brian may need to address it next time. Mike might now know that it’s “more than just sport: it’s a way of life”, but he has no clue what’s actually happening on the field.