Rugby Stats: Ireland must think outside the box when it comes to kicking strategy

Farrell’s side need to employ a sharper, more varied kicking game to prosper against Wales 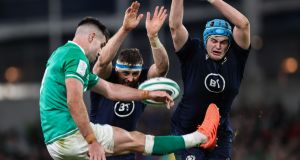 Conor Murray launches a kick against Scotland at the Aviva Stadium. It was one of Ireland’s 29 kicks from open play during the 80 minutes. Photograph: Billy Stickland/Inpho

Ireland’s performance in victory over Scotland betrayed the customary signs of rustiness associated with the first game of a tournament following on from a period of inactivity in the Test match arena.

However given the modest number of personnel changes from the New Zealand World Cup defeat coupled with the suggestion of a more expansive game plan, there were aspects of the Irish performance that jarred with expectations. One criticism centred on Ireland’s kicking game, with an overreliance on box-kicking a particular bugbear for some people.

Those are the headline statistics but what’s more relevant is trying to identify, where and why they kicked the ball. Murray received Stuart Hogg’s kick-off and punted long without finding touch, Sexton nudged a penalty up the touchline after Caelan Doris’s excellent work at a ruck in the first two instances of Ireland’s kicking game.

So far, so orthodox and that orientation didn’t change from Murray’s first box-kick. Iain Henderson won a lineout, the pack took it down and tried to maul but went precisely nowhere as Scotland stopped them at source. It was to become a familiar theme in some respects.

The Irish scrumhalf’s kick drifted a little too far to be contested and when he went to the air again soon after it was because the home side had gone through several phases without advancing a metre. In the first 20 minutes Ireland kicked the ball four times, all with an understandable motive.

It’s the second quarter of the game when Ireland’s kicking game was less judicious on occasion. Henderson nicked a Scottish throw but a sequence of slow, static ruck ball saw Murray box-kick to halfway, once again uncontested aerially. When Peter O’Mahony won a penalty at a ruck, Sexton hammered the ball up the touchline.

Ireland’s inability to get momentum from a lineout maul once again resurfaced. James Ryan claimed possession but even when it belatedly crept forward slowly, Murray sliced a box-kick, the ball barely travelling eight metres.

The first and only time in the opening 40 minutes that the home side kicked the ball inside the Scottish half was when Andrew Conway grubber kicked through and chased; it forced the Scots to turn over possession. Jordan Larmour should have been awarded a penalty as he was tackled late pursuing his own chip, Conway cleared from the Irish 22, before Murray was once again forced to kick as the home side were shut down at a ruck.

To become less predictable off slow ball, Ireland needed to speed up the box-kicking option so as not to allow the opposition to drop several players deep and flood the chasing channel or instead allow Sexton or one of the outside backs to look for space with the boot.

In the second half, or to be more accurate the last 20 minutes, Ireland were less reactive and more proactive in terms of the kicking game, putting boot to ball (five times) in a generally more nuanced way, albeit occasionally forced by circumstances.

No one epitomised this more than Robbie Henshaw who twice employed the grubber kick to telling effect. There was a slight change in emphasis as Sexton took responsibility (two garryowens) when ruck ball became static, a tactic also employed by Larmour as he ran back, kicked and then reclaimed the high ball.

Replacement scrumhalf John Cooney’s arrival in the 60th minute also changed the kicking orientation. His first involvement was a nicely weighted chip over the top of a ruck that bounced into touch in the Scottish 22, his second a contestable box-kick and the final one a superb clearance from inside the Irish 22 that found touch just inside the Scottish half.

Ross Byrne’s only kick was a penalty to touch following CJ Stander’s heroics at a ruck close to the Irish line. In contrast to Ireland, the Scots invariably opted for distance whether through captain, Stuart Hogg or scrumhalf Ali Price, inadvertently on his part it appeared, with Adam Hastings two cross-kicks thrown in for good measure.

So what lessons for Ireland?

If Ireland are going to box-kick it has to be with an eye on the numbers in the Welsh backfield, be contestable aerially and sharper in choosing the option or else look to employ another kicking option from slow, static ruck ball, drawing the Welsh defence forward and using Henshaw as a kicking option. More of the same won’t suffice.