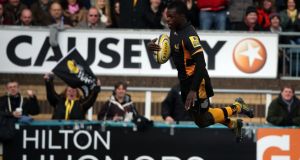 The meeting of Leinster and Wasps this evening has the feel of two struggling squads more interested in their domestic competitions. Victory will be welcome, of course, but defeat will hardly worsen what’s already a deeply troubling season for both clubs. The Londoners previous high standards are hard to see, they have galloped so far into the distance.

Lawrence Dallaglio’s menacing Wasps pack steamrolling Munster, Toulouse and even Martin Johnson’s Leicester Tigers is just a fading memory. They are alive and kicking as a rugby entity but their position on the outskirts of the English Premiership’s big six is not a blip. It’s reality. Theirs is one of the smaller squads in the top flight, 35 players, and it appears to be showing with four defeats on the trot.

The power of Saracens and Northampton forwards proved too much to bear this past fortnight. “It’s a fact that we cannot rotate the squad as much as we would like,” said coach Dai Young this week, but in the same breath the former Wales and Lions prop didn’t wanted to sound like a whinger. “I know that’s offering a big of an excuse but it is a fact.”

The club are haemorrhaging money, €2.4 million lost last year with season ticket sales for the isolated Adams Park dropping by 3,000 and a consortium securing the club’s future as recently as last September.

“Still, we are very disappointed with our last four performances. It wasn’t anything up to the standards we expect. Playing Leinster in a big Challenge Cup quarter-final is something that has us all really excited. It is the ideal game to turn our form around.”

They have three potential pathways into next season’s Heineken Cup. Beat Leinster and go on to capture the Challenge Cup, finish sixth in the Premiership or finish seventh and hope one of the three remaining English clubs wins the ultimate European prize.

The smart play is to give tonight’s game a good lash but target the Tigers match at Welford Road on April 14th.

Wounded animal
Then again, Leinster look like a wounded animal at the moment. No Jonathan Sexton, old Wasps boy Eoin Reddan crocked and Brian O’Driscoll suspended. “We don’t have another four or five players that we can put in anyway,” is the logic Young counters with. “It is not a case of resting players. We haven’t got that luxury. We are really excited about playing Leinster and it’s an avenue into the Heineken Cup. We got to go for every game from now until the end of the season.”

Still, he has made changes from the 22-13 defeat to Saracens. Big Billy Vunipola is benched with England’s powerful young lock Joe Launchbury switched to blindside flanker as Tom Palmer comes into the secondrow. Nicky Robinson gets the nod at outhalf ahead of Stephen Jones, which indicates they are going to attack the open spaces of their narrow High Wycombe pitch. That means going wide early and often to wing assassins Christian Wade and Tom Varndell. Fullback Elliot Daly is highly rated and, like Wade, on the cusp of international recognition.

“We have Joe Simpson as well, at scrumhalf, who has genuine pace. If we are in a game with 10 minutes to go, we are a real threat as we have exciting players who can create something out of nothing. Christian has been outstanding for us this year. He might be small but he makes up for it in agility and quite strong finishing.”

Wade was asked if he’s more Robinson or Williams when it comes to making tackles? “I just stay focused on my positioning, really, because, as you say, I can get caught out.” But even Isa Nacewa will struggle to contain the 21-year-old, should he get a glimpse of the outside channel. That’s the threat. And a big, yet drained looking pack of forwards.