Ulster should prove too strong for Scarlets 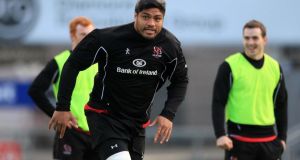 Injuries are rarely opportune but Ulster’s Stuart Olding will be especially miffed to miss out after suffering a concussion in last week’s victory. An outstanding and versatile footballer, he lined out at fullback in the win over the Cardiff Blues but probably would have played either outhalf or inside centre tonight.

His misfortune means that Chris Farrell gets a chance to wear the number 12 jersey, having missed nine months of last season following surgery on torn anterior cruciate knee ligaments. He excelled for Ireland at underage level and at 6ft 3ins and 15 stone-plus offers a strong physical presence while also possessing more subtle skills, like vision and an offloading game.

It’ll probably take him a few games to acclimatise once again to this level but one thing he doesn’t really have is time on his side. The clamour for the role of inside centre at Ulster is keenly contested: Luke Marshall (with Ireland), Olding, Farrell and presuming once fit again, Paddy Wallace (knee) will all lay claim to the jersey.

Switches to fullback
Farrell links up in midfield with Darren Cave, Jared Payne, captain in the absence of the injured Johan Muller, switches to fullback while Ruan Pienaar also swaps numbers from nine to 10. Paul Marshall is at scrumhalf. Up front Ulster coach Mark Anscombe has reshuffled his pack with a new secondrow combination and in the backrow welcomes back Nick Williams.

The Scarlets are similarly hit with international commitments, particularly behind the scrum, where outhalf Rhys Priestland and centres Jonathan Davies and Scott Williams will be particularly missed.

The Welsh franchise, coached by former Ireland flanker Simon Easterby, has broached both ends of the playing spectrum this season. In the Heineken Cup they enjoyed a brilliant victory away to Harlequins in the opening round of the tournament but in the Pro12 they have won just two – Scarlets drew against Zebre – of their six matches to date.

He admitted: “The disruption to our pack with international call-ups has not been quite as severe as our back line and we’ve had some consistency in forwards selection over recent weeks so hopefully that will be a good foundation for us.” It’ll need to be because against Zebre, a major quibble was the lack of a platform from the pack.

Wonderful rugby
Ulster’s performances have occasionally been patchy, within the same match, capable of some wonderful rugby, only to switch off mentally and concede sloppy scores.

The visitors have a good scrum, a solid lineout, even in Muller’s absence, and in number eight Williams, a player who will get them over the gain-line time and again.

There’ll be no fighting over the place-kicking duties tonight, as Pienaar will handle that remit.

Payne is a classy footballer, who invariably makes the right decision and he is surrounded by internationals, senior and underage in the backline. Farrell’s performance will be worth noting on the basis that he gets decent ball.

It’s difficult to see anything other than an Ulster victory if they turn up focused and ready to concentrate for the 80 minutes.

1 Tipping Point: DeChambeau’s transformation raises questions, but who will ask them?
2 Pete Sampras: The forgotten great with the best serve in the business
3 Super Rugby AU offers glimpse of rugby’s future if law changes are adopted
4 Cam Newton broke the mould: Can his flame be rekindled at the Patriots?
5 Game Changers: Vincent O’Brien, a pioneer who took Irish racing to the world
Real news has value SUBSCRIBE