Province have good record against Leicester and travel with optimism 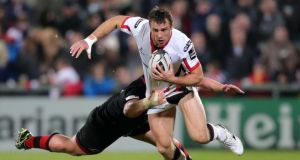 The Irish and Ulster winger, who faces into his first European game against Leicester after undergoing groin surgery in the USA over the summer, was one of a number of seasoned players including captain Rory Best, who were consulted before Doak was recently appointed to the job following the interim installation of assistant Irish coach Les Kiss.

Bowe also agreed that looking from the outside at what was happening in Ulster after the end of last season, people were justified in asking “what the hell was going on” in the province.

But the winger is also convinced that those heady months of departures forced Ulster to change direction, which has made the squad stronger and had given clarity to what they are trying to achieve this season.

“I’m sure supporters, people looking in were probably thinking there’s serious turmoil, what the hell is going on here,” said the 30-year-old from Monaghan.

“There’s no doubt about it, losing Stephen Ferris, Paddy Wallace, Tom Court, people who have been with us a long time, part of the woodwork. Johan Muller, John Afoa, two very influential world class players... that was always going to be a loss.

“And then David Humphreys leaving, that was a big shock. With Mark (Anscombe) leaving that kind of came as a bit of a shock as well. But whenever we heard that Les was coming in the interim, I think it perked everybody up . I think it gave the squad the coaches, the whole organisation a real change of direction. It refocused us.

“I think he (Les) was excellent in the couple of months he came in. The players that have come in have really stepped up to the mark and pushed it a bit as well.”

As would be expected in a team with experienced international players – Rory Best, Bowe, Andrew Trimble and given the circumstances of Anscombe’s abrupt departure, Ulster took on board players views.

“Definitely. Absolutely,” said Bowe. “We do have quite a good few senior players. The likes of Rory Best would have been consulted and other senior players as well... Yeah myself and others so...we want to be the best we can be.”

Ulster have had a good record against Leicester and beat them twice last time in a close-but-no-cigar season. There is no cheerleading just yet after six weeks, more a steely determination to punch through in Europe. They know the injury profile at Welford Road is steep although Leicester do have the wrecking ball Manu Tuilagi back.

Tigers’ ground may have lost some of its lustre in recent years as a place where visiting teams have traditionally been eaten up and spat out and Ulster with a hiccup against Zebre and a terrific win over Glasgow, travel as the best form Irish side. They know in their heads that it is as Bowe says, “doable.”

“There is a bit of history there and I am sure they will be licking their lips at the thoughts of us going back to Welford Road first game up,” he says.

There is a sense too that maybe the province has been getting players back at just the right time and in the backline, even international players are struggling to get in and impress Joe Schmidt before he whittles things down for next month’s international run.

“Last weekend we put out what would probably be our strongest side but certainly in the backline, you just have to look at the number 12 spot,” says Bowe.

“You have Luke Marshall, who had been carrying a few injuries, Stuart Olding, who is a fantastic talent, and then Stuart McCluskey who has played the last three games and played out of his skin, a big, strong boy with good ball skills as well.

“Then you have Darren Cave who might potentially play 12 and throughout the backline it’s like that, we have the same on the wings with myself, Trimby, Craig Gilroy, Mikey Allen, Rory Scholes.”

But little light has been shed on the hoary old chestnut of outside centre since Brian O’Driscoll vacated the position at national level.

“I’m very much concentrating on just nailing down my place on the wing and trying to get myself back to the standard,” he says after a try-scoring weekend. So far then, everything just so.