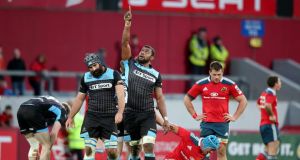 
There are just three match weekends left for the majority of teams – Glasgow Warriors have four – in the RaboDirect Pro12 tournament as the teams jockey for a place in the semi-finals. Leinster lead the table four points clear of Ulster, six ahead of Munster and nine in front of Glasgow Warriors who have a game in hand on their three Irish rivals.

It is mathematically possible for the Ospreys (56 points) to still make the semi-finals but they are definitely, for now, the outsiders of the five teams left in contention, albeit that they play the Dragons, Zebre and Connacht in their final three matches, all of whom they’ll fancy winning.

The Warriors have arguably the easiest run-in, while Ulster’s couldn’t be tougher as they must face their three main rivals; two of those matches take place away from home in Glasgow and Limerick.

Clearer picture
The semi-final picture will become much clearer after Friday night when Glasgow host Ulster at the Scotstoun Stadium. The winners here will be in the box seat in the race for the semi-finals. The Scottish side play their match in hand on the weekend of the Heineken Cup semi-finals when they welcome Edinburgh in a derby match.

Two of Leinster’s last three games are at home, starting with Benetton Treviso this Friday. They travel to Ravenhill a fortnight later before hosting Edinburgh. Munster must travel for two of their last three fixtures to the Sportsground and Edinburgh before hosting Ulster at Thomond Park and must also prepare for their Heineken Cup semi-final against Toulon and potentially a final thereafter.

The teams that finish first and second in the league stage of competition will host the semi-finals with the final being staged at a venue of the highest remaining seed’s choosing.