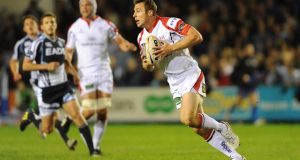 Ulster’s Lions duo of Tommy Bowe and Rory Best are set to make their seasonal returns this Friday for the home game against Treviso, while Craig Gilroy is expected to start after his run-out off the bench against Connacht, possibly at full-back.

“We’ve had a few guys coming back from injury and the player management programme with the Irish set-up,” said a non-committal Neil Doak yesterday, the assistant coach adding: “They had an Irish camp Sunday and Monday so we didn’t really get together on Monday and just had a flush out. We’ll be looking at our plays and set-ups from now on for the weekend.”

“We’ll make decisions later in the week with those guys. Tommy had surgery on his wrist during the Lions, but we’ll hopefully get them back in the mix if not this weekend, then definitely the following weekend. They did a little bit of work this morning but they’re not on the pitch this afternoon.”

John Afoa returns from New Zealand this Thursday, and might, at a push, be pressed into action as Ulster’s resources have been thinned after picking up another couple of injuries in Galway, especially at tight-head, where Declan Fitzpatrick suffered a bang on the head, as did winger Michael Allen.

The following week, Ulster travel to the Ospreys before facing Leicester at home and Montpellier away in their opening games of their Heineken Cup pool, which also features Treviso. All four of their opponents won last weekend, and Ulster dearly want to have some momentum before facing a trio of sides _ the Ospreys, Leicester and Montpellier – won scored 15 tries to one in beating Edinburgh, Newcastle and Clermont by an aggregate of 118-22.

Treviso arrive in Belfast buoyed by last week’s rousing comeback win over Munster and with a decent record against Ulster in recent seasons, notably a 29-all draw at Ravenill last season. “They’re a pretty smart side and their very intricate with their lineout plays and they’ve got a physical pack especially in their back row.”

“They’ve got Brendan Williams and other good runners and they’ve got some kicking options as well with Berquist so we know they’re a pretty decent side and they’re coming here with a purpose.”

“They rush hard defensively and try and limit your time and space. We’re under no illusions this weekend and it’s going to be a very tough game. We’ve got to match their physicality and we’ve got to be on our toes for any of their intricate little line-out plays, and patterns, to limit their platform to attack off.”

1 Born to ride, born to win: Sam Bennett, the making of a green machine
2 Leinster look ready to step things up and burn off Saracens challenge
3 Will Connors now delivering on his massive potential
4 Keith Duggan: Surreal story of John Delaney needs to act as a wake-up call for FAI
5 Rory McIlroy battles to stay in the mix as Patrick Reed leads the US Open
Real news has value SUBSCRIBE