Groin injury has taken longer than anticipated to heal 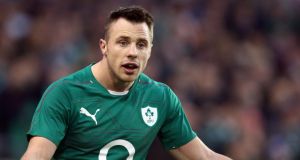 
Tommy Bowe’s troublesome groin injury will sideline him for a tad longer than anticipated as he will miss Ulster’s RaboDirect Pro12 match against the Scarlets at Ravenhill on Friday night (7.05).

His absence from that match would appear to remove the slenderest possibility of a recall to the Ireland squad for the Six Nations game against England at Twickenham on Saturday week.

The wing damaged a groin in the November Test against New Zealand and hasn’t played since. Ireland manager Michael Kearney had been hopeful when speaking to the media at the beginning of last week that Bowe would be fit to play this Friday but since then Ulster coach Mark Anscombe intimated that the player had suffered a setback that might delay his return until the Benetton Treviso match.

Ulster backs’ coach Neil Doak when asked whether Bowe would be fit for the Scarlets’ game offered a downbeat assessment: “He’s doing a little bit of running but I can’t see it,” following yesterday’s training session.

Medical opinion
Ulster will be without Dan Tuohy (broken arm) and must await further medical opinion on last weekend’s try scorer in the 10-7 victory over the Ospreys, Darren Cave, who hyper-extended his left knee and secondrow Lewis Stevenson, who is bothered by a neck issue. Both will be assessed again before tomorrow’s team announcement.

Ireland coach Joe Schmidt elected to play Cave at inside rather than outside centre for the Irish Wolfhounds against the England Saxons. Doak who helped to coach the shadow national side, alongside Anthony Foley, maintains that the shift in position could be a positive experiment for both player and province.

He explained: “Getting exposure in other positions obviously helps any player’s cause. Cavey has been playing 13 for most of his career and it (the shift to 12) adds another string to his bow.”

“It’s key we have all our best players available and if guys are given exposure in other positions and can do a decent job it is good for their development.”

Tuohy’s unfortunate injury sustained against Wales when coming on as a replacement represents a significant blow to the player and the province as he’s been in excellent form. Doak admitted: “He is a big loss to us. But somebody’s injury can create opportunities for others. Hendy (Iain Henderson) hasn’t had a lot of game time over the last while so obviously he might get a bit of exposure going forward.”

Ulster are hoping to have Paddy Jackson available for the Scarlets match but that may depend on whether Jonathan Sexton makes the national mini-camp in Clonmel today and tomorrow.

The latter may be required, most probably to sit on the bench for Racing Metro 92’s game against Bayonne at the weekend and if so won’t be available for the Irish get together.