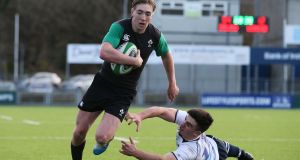 Ireland U-20’s Terry Kennedy runs in for a try despite the efforts of Leinster’s Tim Foley at Donnybrook Stadium. Photograph: Cathal Noonan/Inpho

Ireland U-20 66 Leinster Development XV 12 Ireland coach Joe Schmidt and kicking and skills’ coach Richie Murphy were among those in a crowd of about 100 people as the Ireland Under-20 team began their competitive preparations ahead of the age-grade Six Nations that begins in February.

Another spectator was former Ireland international wing Terry Kennedy, who watched his son, Terry Jnr – the latter has played for the Ireland Sevens team this season – score six tries for the Ireland side, a hat-trick in each half, in a 10-try haul.

Kennedy, who started on the left wing and finished the game at fullback, profited from the bright rugby and neat handling skills of his team-mates. But not all of his tries were down to the work of others, as he demonstrated some lovely balanced running and impressive speed.

The Irish side were dominant in the scrum, and in prop Ben Betts, secondrow James Ryan and flanker Matthew Cosgrove boasted three players who excelled in all facets of the game. Outhalf Jimmy O’Brien’s running, handling and decision-making gave time and space to those outside him; something the three quarter line used intelligently for the most part.

Leinster’s resources were severely depleted by their British & Irish Cup commitments at the weekend but it didn’t hamper their enthusiasm with openside flanker Charlie Cregan particularly conspicuous.

Ireland U-20 head coach Nigel Carolan: “We had 13 players that we didn’t select for this game because they were involved with provincial A sides in the British & Irish Cup. We need strength in depth, we went through 36 players last year and this game gave us a chance to look at some of the options we have for every position. Some of those did very well.”

An Ireland Under-20 team will play a Munster Development XV in Musgrave Park on Monday, December 28th.

Then during the following week the extended squad will be whittled down to 30 players.