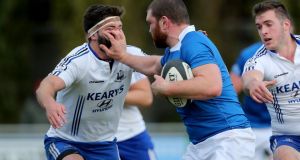 Terenure College were in seventh heaven at Musgrave Park on Saturday as they enjoyed their second successive bonus-point victory over Munster opposition – a runaway 47-0 thrashing of Dolphin.

Terenure followed up last week’s 42-0 home hammering of Young Munster by breaking the 40-point barrier again with seven tries in all, including a hat-trick from winger Harry Moore.

With Lansdowne losing at Ballynahinch, James Blaney’s men are now four points clear at the top of Division 1A ahead of a four-week break in league fixtures.

The surprise result of the day saw Ballynahinch end Lansdowne’s winning start to the season with a 14-10 defeat at Ballymacarn Park.

It was a day to forget for St Mary’s College as they suffered their second home loss of the season, going down 26-15 to a resurgent Cork Constitution side.

Young Munster put last Saturday’s nightmare result at Terenure behind them by overcoming Old Belvedere 26-19 in a thrilling contest at Tom Clifford Park.

Two late penalties from fullback Ben Martin clinched a galvanising second league victory for the hosts who are now seventh in the standings.

The league leaders came from 22 points down to win 29-25 in a dramatic finish in Athlone, with winger Colin Conroy claiming the match-winning try.

Garryowen finished the first four-week run of matches with their third win, a 24-13 success away to Belfast Harlequins.

Head coach Conan Doyle featured at inside centre as the Light Blues bagged tries from Neil Cronin and Ben Rowley, while outhalf Jamie Gavin accumulated 14 points with the boot.

Garryowen’s arch rivals Shannon lifted their spirits with a much-needed 30-7 bonus-point triumph away to Corinthians.

Elsewhere, man-of-the- match Ritchie McMaster steered second-placed Ballymena to their fourth victory on the trot by edging out UL Bohemians 30-23 at Thomond Park.

Dublin University were back at their spiritual home on Saturday, playing on the new College Park pitch, and they marked their return with a well-judged 26-17 win over Malone.