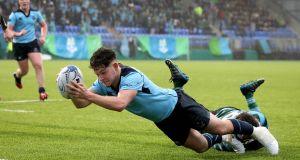 It took St Michael’s all their patience to wear down St Gerard’s in the Leinster Senior Cup first round at Donnybrook.

The fact neither school could trouble the scoreboard in the first half was down to the trying conditions, a treacherous blend of whipping wind and rain. St Gerard’s must have sniffed a shock from the abrasive and courageous defence of their line.

The energy to get up and into the faces of their opponents was admirable and their hooker Daniel Power and centre Marc Baker carried strongly into the teeth of the wind. They were in with a real shout as long as they could control the ball with the elements at their backs.

They simply never had enough of it as St Michael’s upped their game to force the critical breakthrough from fullback Ian O’Kelly’s fine line onto the ball for Harry Byrne to convert in the 38th minute.

Outhalf Byrne was soon back for three more points when St Gerard’s didn’t obey the rules at the breakdown. Stephen Judge wasn’t slow to show up in the outside channels where the hooker pounced for his try.

Byrne was on target from a penalty and left wing Christopher Carey slid over on the left in the 67th minute to guarantee a quarter-final place.