Joe Schmidt: Tadhg Furlong should be fit for Wales clash 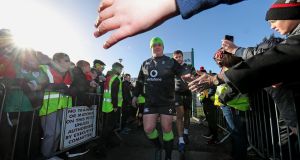 Tadhg Furlong ran at ‘75 per cent’ in Athlone on Thursday, according to Ireland coach Joe Schmidt. Photograph: Billy Stickland/Inpho

Joe Schmidt has given the most optimistic noises yet about Tadhg Furlong’s well-being following the hamstring injury which forced the tighthead off after three minutes of the win over Italy.

Furlong did some running on the sidelines at today’s open Irish training session in Buccaneers RFC in Athlone, as did Iain Henderson after being forced off at half-time in the same game with a similar issue, and afterwards the Irish head coach even forecast that the prop might be fit enough to resume full training next Tuesday in advance of Saturday week’s Six Nations game against Wales at the Aviva Stadium.

Asked if he thought Furlong would be fit to face Wales, Schmidt said: “Yeah, I think so. He’s gone really well. Iain Henderson is probably a little bit ahead of him. Iain felt he could have played the second half but we took him off as a precaution. You saw him working with Tadgh there, he’s pretty much 100 per cent. We are just kind of staging their re-entry. Iain could have trained today but he’s also played a lot of minutes so we’re just managing him.”

“At the same time, James Ryan has also made really good progress so those two are back in the mix. Tadhg ran 75% speed today and did change of direction. He’s not far away from potentially being able to train fully on Tuesday.”

Furlong has become a key player for the Irish team. “He’s a starting player for the Lions,” said Schmidt. “That speaks volumes for the progress he has made over the last couple of years and at the same time, John Ryan and Andrew Porter have played a fair bit for us. What you’ve got to have is depth in your squad and you’ve got to have confidence in that depth and that’s what we’ll go to now.

“If it’s not required that’s all well and good but if it is, we’ll keep forging ahead with the players we have available.”

Alas, Schmidt confirmed that Robbie Henshaw is likely to be absent for “three or four months,” and the Irish coach indicated that the odds are against Garry Ringrose being fit for the Welsh game having been sidelined for six weeks with syndesmosis. He is not expected to feature for Leinster at home to the Scarlets on Saturday.

“I don’t think Garry is going to play this weekend at this stage but again I haven’t spoken to Leo (Cullen) since Sunday. That may have changed as he was making really good progress. He was on the cusp of being involved, probably a week ahead of where (Sean) O’Brien is at the moment.

“Garry for us, if he doesn’t play it wouldn’t necessarily rule him out. He was outstanding in the Six Nations so he would be an option. He may spend a couple of days next week with us and that will allow us to make a decision. If it’s not us, I’m pretty sure it will be Leinster [v Kings]because he is due back.”

Chris Farrell is thus set to renew his partnership with Bundee Aki, who played together for the first time in the November win over Argentina. But with Jared Payne sidelined since the Lions tour, Ireland’s midfield depth is being stretched.

“It’s a huge test,” admitted Schmidt. “I think people have gone past Jared Payne, who the last time we won the Six Nations played the whole time at 13 and was unbelievably good for us. He was one of the guys we lost in the World Cup. Now we’re down a third centre so if you look at the strength in depth, we’re down to our fourth centre.”

“It’s a great test for us. There has been a lot of focus on players other teams didn’t have but we’re always excited about who we do have and focus on that. It was a lot of glossing over the 12 guys we had unavailable but at the same time there was a lot of excitement about people saying we were in really good shape.

“If we can keep people positive despite losing Josh Van Der Flier on top of not having (Jamie) Heaslip and O’Brien, Tommy O’Donnell, I think we’re in a pretty good place. I think we’ll all be watching against Wales and find out a little bit.”

The likelihood is that the midfield will be swelled with an additional call-up or two at their base in the Carton House next week.

“At least we’ve got a bit of time and we can get a little bit of preparation done with combinations. That may extend to a couple of guys coming in next week to build a bit of depth in a couple of positions as well,” said Schmidt.

This also served to underline the value of the two-day camp in Athlone, which culminated with an open training session against the Irish Under-20s in Buccaneers on Thursday, watched by over 3,000 supporters, mostly noisy young fans on mid-term, in a mix of sunshine, snow and sleet.

“The first thing is that it’s an investment in our Under-20s side, of which over the last few years James Ryan and Andrew Porter have come through,” said Schmidt. “Recently Dan Leavy and Joey Carbery aren’t that far out of the 20s so we have those sorts of players who are coming through.”

“The first thing is we get to identify, we have a bit of lunch with them and get the opportunity to get to know them a bit better. We’re made to work pretty hard, they’re young, they’re hard and they move the ball around quickly. It’s non-contact mostly so we can’t try and bully them. It’s a really good hit out for us. You would have seen there’s energy out there from the start.”