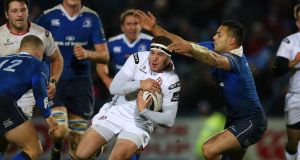 Rob Herring in action against Leinster: “It was a massively proud moment for me and a really big honour to pull on that green jersey. I loved it.” Photograph: Billy Stickland/Inpho

Successive defeats at home to Saracens and away to Leinster, in which they scored just four penalties, have left them adrift in their European Champions Cup pool while languishing in seventh in the Guinness Pro12 table.

“It’s been a tough season,” says Herring, who nevertheless says that the “awesome facilities”, quality of coaching and support base made it “a pretty easy decision” for him and his South African girlfriend Nicola to remain in Belfast despite Ulster’s early season dip.

“It’s hard to put a finger on it. Our attack has been fairly good. We’re the second highest try scorers in the Pro12 (with 23 tries, second only to Connacht on 25). We’re just tieing up a few things in defence and if we’d taken a few more chances, it could have been a different story. All our losses in the Pro12 have been fairly tight.”

Indeed, there have been three losing bonus points, and five of their eight games have been away, having won all three league games at the Kingspan Stadium. Herring maintains that there’s been no talk of a World Cup hangover around the Kingspan, where attendances have been strong and enthusiastic, although he concurs with Les Kiss that Edinburgh at home tonight has become a “massive game”.

“We need a win, and we need a good performance as well. We don’t want to be in mid-table. We haven’t been there in the last four years. To be honest it’s pretty horrible to look at that table, but as it stands we are only four points off the top four so one good win can change things around pretty quickly.”

From Cape Town, Herring qualifies for Ireland through his grandfather on his mother’s side, who hailed from Belfast. He is very much the youngest of four; his three sisters (Kim, Sasha and Tara) range from 22 years to eight years older than him.

“My family are my biggest support base. Two sisters are coming over for Christmas, and that would mean all three have been over. My mum has been over, so I’ve just got to get my dad out now.”

His dad, Robert Herring, was a naval engineer who played football in the navy, and while his mum, Gael (nee Boyd), was “also pretty sporty”, there was no rugby in the family tree as such, although his brother-in-law Anton Moolman, played provincial rugby and is now coaching the Western Province academy.

“Honestly, I think the fitness is just crazy in water polo. It’s something I still play socially but it’s a very tough sport. It’s quite physical as well, and I always thought the two complimented each other. You do water polo all summer and so you get fit for rugby in the winter.”

Initially, he played in the second row for four years.

“Then I moved to hooker when the rest of the guys starting catching up with me.” On leaving school, he had the chance to join the Western Province academy but instead chose the London Irish academy after contact between his headmaster and a South African coach at Irish, reasoning that it would better to be one of 12 than around 90.

“I wanted to make a career out of rugby and I thought that was the best opportunity for me. Looking back it was a good decision. The quality of coaching I got was incredible.”

He stayed for two years before returning to Cape Town to study and play for the Western Province Under-21s, whereupon, “out of the blue”, David Humphreys rang him. “I came over for a trial for seven months and I’ve never left.”

Like CJ Stander, another Irish-qualified South African who signed a new two-year deal this week, Herring has been exposed to more first-class game time here than might have been the case in his native land.

Also 25, there is time aplenty for Herring to improve, to keep pushing Rory Best and perhaps succeed him. “Rory has been setting the standard for Irish hookers and I modelled my game a little on him. I’ve definitely improved as a player, especially in the scrum, but in the next two seasons I want to start pushing him more.”

Having tasted Test rugby with his sole cap on the tour to Argentina in 2014, he wants more. “It was a massively proud moment for me and a really big honour to pull on that green jersey. I loved it. The disappointment for me is that I haven’t been able to kick on from it.”

“If you look at guys my age, like Jack McGrath, they’re playing international rugby and are mainstays in the squad. I have got a bit of time to improve, but I want to be there now.”

To achieve his aim, the Irish management believe there’s scope for him to improve his game and to bulk up from around 101kg to somewhere closer to Best’s 105kg.

“The main thing for me is to get more game time with Ulster,” says Herring, “and in the bigger games, the interpros and the European games. If you perform in those then you’re in with a chance.”