Ulster aiming to bounce back after successive defeats in the PRO12 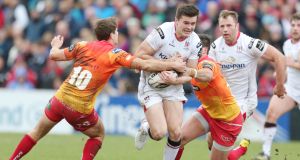 It’s a measure of Jacob Stockdale’s recent performances that the talented Rory Scholes has agreed to join Edinburgh next season on a two year deal. Ulster are producing some excellent young backs and despite losing Scholes and Sam Arnold – the latter joins Munster in the summer – have depth to their resources.

Stockdale could reasonably have expected to be part of Ireland’s Under-20 Six Nations campaign, his second year at that level, but he’s taken his opportunity to become a regular fixture in the Ulster team, retaining his place on the merit of performance.

It’s the correct decision to allow him play Pro12 rugby over the underage representative fare and injury permitting, both Stockdale and Arnold, should be available for Ireland U-20s for the World Championship in Manchester in June.

The home side are coming off the back of two defeats in the tournament so the arrival of a Zebre team, decimated by injury and international commitments, to Belfast may provide the perfect tonic. The Italian team shipped 52 points without reply on their last visit to Ireland.

Ulster coach Les Kiss has picked a backline that oozes footballing ability with the in-form Craig Gilroy switching to fullback and this allows Stuart Olding to return to inside centre in a high class midfield partnership with Luke Marshall. Zebre have only won once ever on the road and that was a few years ago against Cardiff Blues and based on their depleted resources that’s a run of disappointment that’s likely to continue tonight.

It promises to be a long Belfast night for the visitors.

1 On healing and wild hurling: The re-education of Diarmuid Lyng
2 Triple bogey costs Rory McIlroy as Adam Scott prevails at Riviera
3 Few, if any, have given as much to Munster as Garrett Fitzgerald
4 Solskjaer unable to say if Paul Pogba will play for Manchester United again
5 ‘Your father works for my father’: Schools rugby turning toxic in the stands
Real news has value SUBSCRIBE